This past Wednesday, my painter friend, Meredith and I traveled to Williamstown and visited the Sterling and Francine Clark Art Institute http://www.clarkart.edu/ . On displayed was an exhibit entitled, "Rembrandt and Degas: Two Young Artists".  As a young artist, Degas had spent three years in Italy studying and copying the masters including many of Rembrandt's self portraits. This show is intimate in number, 16 artworks  in total as well as in subject matter, Degas's and Rembrandt's self portraits, in paint and print. I opted to skip the overwhelming MFA, Boston Degas Exhibition for this little show. I wasn't disappointed.
A few years ago  I wrote a little essay about portraits.  The piece follows :
This past winter my plein air painting friends decided to rent a studio to keep our friendship fires warm and our painting eyes and hands honed.  On Thursday mornings, while the Northeast winds howled and the ice dams grew, we each drew numbered lots and took turns sitting quietly to pose for a 30 minute period as the hub for searching eyes and sketching tools.  These portrait drawing sessions were an experience that included both vulnerability and veneration: the former for the sitter, the latter for the artist.
Alexej von Jawlensky (Russian, 1864-1941) was fascinated by the sensual and spiritual power of the face.  About the end of WWI, he started to draw "mystic heads" or faces of the saints and entitled them poetically.  By 1916, he progressed to a spiritual brand of abstraction called Meditative Art, a unique contribution to Modern Art.  I too found myself drawn to the transcendent spiritual qualities of my painter friends' faces.

There is a similarity of approach to the painting of an outdoor landscape and the landscape of the human face.  With lines, colors and textures, these elements express much and then more.  They describe the terrain by delineating flesh into deep fissures, soft wrinkles and perhaps end with a dimple.  The landscape maybe capped with a snow white crown, or covered with the rosy patch of blood vessels steamy on the surface or divided into dark and light by the vertical slope of the nose.  Will the focus be on the smile or the pensive look or the inward glance towards the soul?  Look deeply at this landscape.  Give quiet pause.  Let the eyes move across the surfaces.  Travel their history.

The artist's challenge is to fill a small format with  rapid chiseling paint and brush into the jewel we all are.
"Come meditate upon my face and I upon yours and then with point, line and mass express the sensual and the spiritual represented in the human face while coming to terms with the question of who we are: we are merely humans with the face like His."  SJS
Posted by Susan Jaworski-Stranc at 8:21 AM No comments:

Why barns are red? 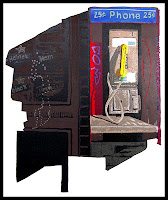 On Tuesday, I traveled to Zea Mays Printmaking Studio in Northampton to deliver a portfolio of linoleum prints.  I also took along my plein air painting gear.  Snow had fallen the night before and I had the great expectation of locating a few choice snowy scenes to paint along the way making the five hour round trip a productive one.

Traveling along the 202 route corridor, I entered the town of Hadley in the area known as Pioneer Valley.  Because of the rich sandy loam glacial deposits along the Connecticut River, there are many, many arce farms.  Numerous farms have polish names broadcast across their farmstand billboards; Matuszjko, Smiarowski, Dzen.  In the late 1800's many Polish farmers were recuited from Ellis Island to farm this area.  Polish farmers are credited with saving Hadley's farmland.  The area was once known as the Asparagus Capital of the World, or as the locals called it, Hadley's Grass, until a soil borne fungus killed most of the crop in the 1950's.  Today at Twin Oaks Farm, they are developing and growing a new cash crop of cabbages, not the bowling ball size but smaller head cabbages, all under a pound for today's foodies. http://www.redtomato.org/farm.php?id=28

Ever wonder why barns are painted the ubiquitous color of red?  I suppose people have also questioned why grass is green.  As an artist, I like the the combination of those two colors, red and green.  They are complementary colors in the art world and are found opposite each other on the color wheel.  Used together, they set up good vibrations.

So..to the question why barns are red and grass is green, I answered with a charming oil painting sketch of one of Hadley's red barns, green grass under murky grey skies; painted in two hours before the cold rains fell. 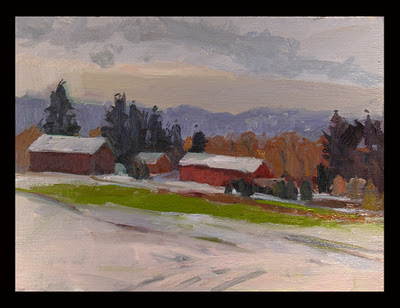 Another answer to why barns are red is in the late 1700's, farmers began painting their barns with a combination of linseed oil (made from flax seed) and ferrous oxides (old fashion rust) changing the look of weathered grey timbers into red stain.  This artificial preservative prevented mold and mildew from forming and destroying the barn's wood.  Wealthy farmers added the blood of slaughtered animals to the linseed combo.  Much later, red oxides were the cheapest paints found hardware store shelves.

Aesthetically speaking though, red barns in combination with those fertile green fields contrasted beautifully with the farmer's white washed farmhouse ... and many paintings and artwork have paid homage to this color combo and to the people who farm and grow our food.
Posted by Susan Jaworski-Stranc at 11:00 AM No comments:

For a limited time only... 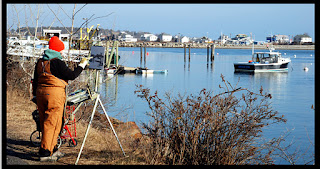 This past Saturday, I took advantage of our area's moderate temperatures for January and painted at the snug little harbor of Rye, New Hampshire.  Being an experienced New Englander (and a native of Buffalo, NY), the lack of snow cover and warm temperatures aren't going to last forever.

When the sun's low path crosses the winter sky, a pleasing soft, warm light is available for a longer time to ponder and paint.  In this quiet harbor of a few fishing vessels, I found this special quality of light.  With the arrival of winter's shorten days, strong contrasts of summer's high noon give way to the lengthening shadows across the frozen, dormant ground. 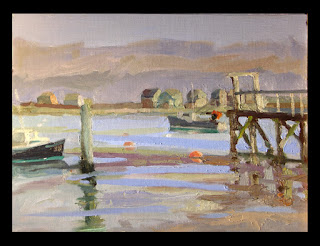 After completing my painting, I ventured further up the coastline looking for another short lived winter event: fresh Maine shrimp (heads and rostrum included) being sold right off the back end of fishermen's pick-up trucks.  With attention driven signs of "One Dollar a Pound" and "Fresh Shrimp", how could I not stop many decades ago when I first arrived along these shores?  Once I tasted these small, sweet delectables, no January can go by without hunting for these road side markets and the purchase of ten pounds or more.

There was an urgency to buy earlier this year because the shrimping season will be a short one due to new federal regulations.  This year only 4.4 million pounds of shrimp can be netted or trapped by the locals, i.e. one third of 2011 catch. 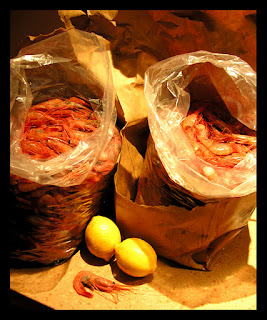 When I arrived home, I gave honor to my winter tradition with a devotional-like carnage:  I spent the next three hours decapitating and remove roe from 16.5 pouinds of shrimp.  What a great way to re-connect with my environment!  For dinner, I greedily savored, with a fork, a sweet sampling piled high on a bed of Iceberg lettuce, covered with fresh squeezed lemon juice, olive oil and Old Bay seasoning.
Let winter begin.
Posted by Susan Jaworski-Stranc at 10:28 AM No comments:

An Apple a Day...gives me an idea!

At the start of apple picking season here in New England, I initiated a new print project.  It began with me eating the delicious fresh fruits and photographing the surface changes as I bit and munched away at the once smooth, round forms.   I began researching apple legends, folklore and traditions such as Snow White, Johnny Appleseed, William Tell, Sir Isaac Newton, "The Big Apple", Apple Wassailing, just to name a few.  I'm hoping to find similarities between my printed images of half eaten forms and some of the apple legends.

Here are three of the four, 4.5"x6"linoleum prints I have created so far. (scaled to fit block) 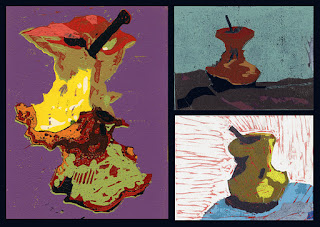 I want to share a surface enhancing technique called flocking I used in the making of the print, "Protecting the Seed Within".  I learned three important points when working with this material: 1. Always wear a dust mask 2. Use a sieve; don't sprinkle from the container and 3. A small quantity of flocking goes a long way.

In flocking, small fiber particles are adhered to a substrate using an adhesive.  As a child I remember rubbing my hands across velvety surfaces of Christmas cards to which evergreen trees and Santa's clothing were flocked.  Flocking materials can be purchased at your local arts and crafts store and comes in a wide variety of colors.

After completing the small edition of ten prints, I immediately sprinkled the wet printed surface with flocking and pressed down gently with newsprint.  The wet ink acted as the adhesive.  I removed the excess flocking by carefully shaking the paper over a tray.  But I learned rather quickly that the more I handled this material i.e. recycling the excess back into the tray, an electrical charge was generated known as static electricity which caused the fine flocking to clump into small hard pills rendering the material un-usable.  Of course, I didn't know this was going to happen but...

I recalled watching a YouTube video of a model train enthusiast making a flocking tool by soldering together a battery operated automatic fly swatter (swatter removed) and a handleless kitchen sieve.  Thank goodness I was intrigued enough to watch the construction because I now understood why the sieve tool was so important for applying an even coating of green flocking to his model train landscape; no static electricity means no pilling.

So I searched around the studio knowing I did not have a sieve and found some yardage of starched cheese cloth called tarlatan cloth (used in inking up etching plates).  The stiff cloth was awkward to use but I was successful in creating a even coating of flocking on my wet prints. 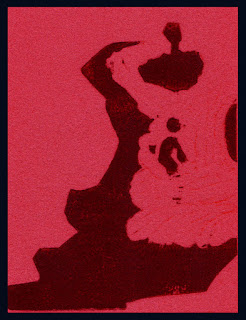 After the prints were dry, I inked up the newly carved linoleum with a dark brown ink and using a printing press, embossed the new color into the red flocking.  The areas of the un-inked carved linoleum were embossed into the flocking as well.

The use of flocking increased the tactile sensation and with it the need to caress the printed surface; quite fitting for an apple image which looks like a shapely woman and the seeds within perhaps representing an unborn child.
Posted by Susan Jaworski-Stranc at 11:55 AM No comments: