Here's a painting recently completed at a farm in Kingston, New Hampshire. The farm had lots of willing painting subjects such as sheep, pigs and chickens, lots of chickens. 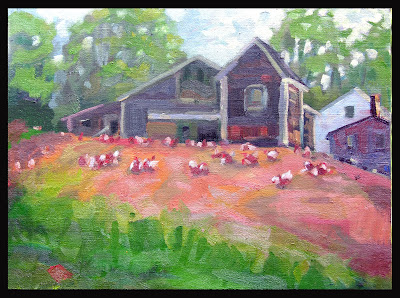 The chickens were free-range chickens.   The feathered ladies and I had quite the conversation as they gathered around my easel while I painted their homestead.  At times I looked down at them and they looked up at me... heads cocked staring with those little beady eyes, then looked away with a scratch, scratch here and a scratch, scratch there; and I with my paint brush in hand, a daub, daub here and a daub, daub there.  We all seem to be in good humor among the pleasantries of a farm that day.

I've been thinking about my day there.  So this week I was drawing, with pencils... at home... in my bedroom..at my desk..in my sketchbook from photos taken at the Kingston farm. 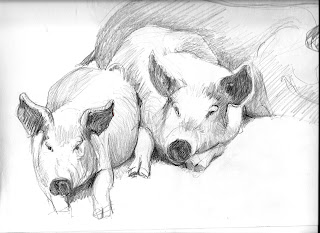 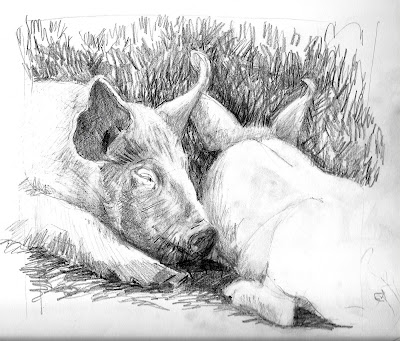 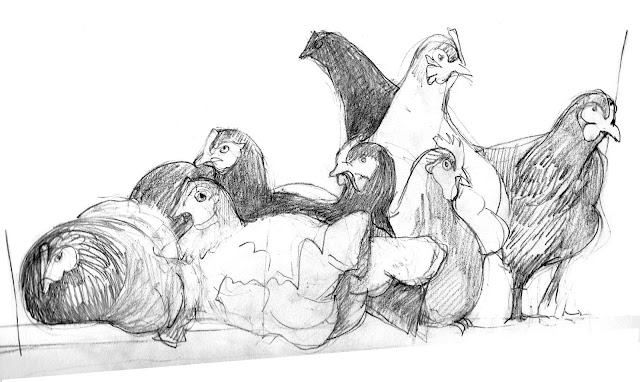 I had to chuckle when I finished this drawing.  In an instant I saw a resemblance to Rembrandt's, Dutch Masters: uniformity in dress, focus on portraiture in a group setting.  My husband suggested putting hats on the ladies.  Cluck, cluck,,, no, no, we all thought. 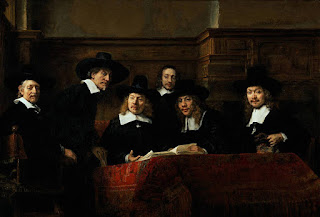 Posted by Susan Jaworski-Stranc at 10:48 AM No comments: 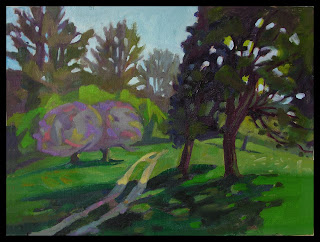 often bothered by small flying insects buzzing around my head which then get stuck on my canvass in the goo of my paints; gnats, mosquitoes, no seeums.  This insect made me take notice because it was rather large with curved spotted antennas.  It looked like the invasive Asian Long Horn Beetle I have read about in the newspapers.

Pinched between my painted gloved fingers I marched into the Park Office and presented my hard shelled offender to the Ranger. "Could this be the most wanted insect?"  The Ranger would let me know when he found his identification card. Of course when he opened his hand where I had placed the bug for safe keeping, the insect, a flying insect, flew to parts unknown in his office.

I stood there with my mouth open. "OK! I'll just return to my easel where I can be more productive and you can let me know what creature landed on my palette.  See ya!"

So here is the dilemma.  Without the culprit in hand, identifying it properly would be very difficult. When the Ranger contacted the MA Forestry Department, the office informed him the Asian Long Horn Beetle has a look-a-like called the Pine Sawyer and the chances were I found a Sawyer.


I do hope the Ranger found that beetle in his office because I was standing under a canopy of oak trees not pine trees. This non-native wood boring beetle is a real threat to our native trees. Once the infestation has been identified, the infected and nearby uninfected trees are clear cut and removed, a travesty to many neighborhoods.  I was informed the Forestry Department would be sending someone out to inspect the trees. It is that important.

I do hope when I return to the State Park in the future, those beautiful trees will be still standing tall to inspire me and others to paint outdoors under the coolness of their shade.


To learn more about the Asian Long Horn Beetle go to:
http://www.smithsonianmag.com/science-nature/invasion-of-the-longhorn-beetles-145061504/?no-ist
Posted by Susan Jaworski-Stranc at 6:47 AM No comments:

Getting the most out of a reduction printing session

During two recent edition printing sessions, I decided to develop other printed images from the blocks worked during my typical reductive process.  With the principles of Notan, I decided when my block's printing surface was about 50% reduced; meaning when the plate is printed in one color, the design would hold 50% white shapes and 50% dark shapes.  It is at this point in time, I began experimenting with different printing techniques to create tangent prints within the development of my final reductive printed edition.

Here are some examples: 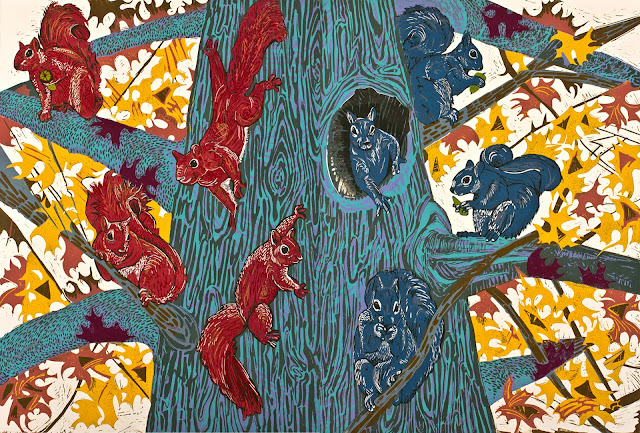 The tangent print above is comprised of three individual prints photoshopped together into one image for this final presentation. 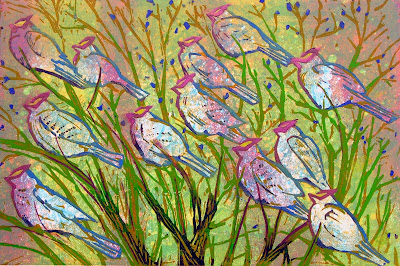 A number of multiple images, called tangent prints, can be printed within the process of completing a reduction print edition.  I like the possibilities of creating a set of unique prints within the larger realm of completing an edition.

Posted by Susan Jaworski-Stranc at 6:39 AM No comments:

Do not know what state I'm in?

I live in the state of Massachusetts but I'm talking about what state number my squirrel print is in its present development phase.
So I counted up the number of colors I have mixed and printed ...16! That's sixteen layers of colors to date. 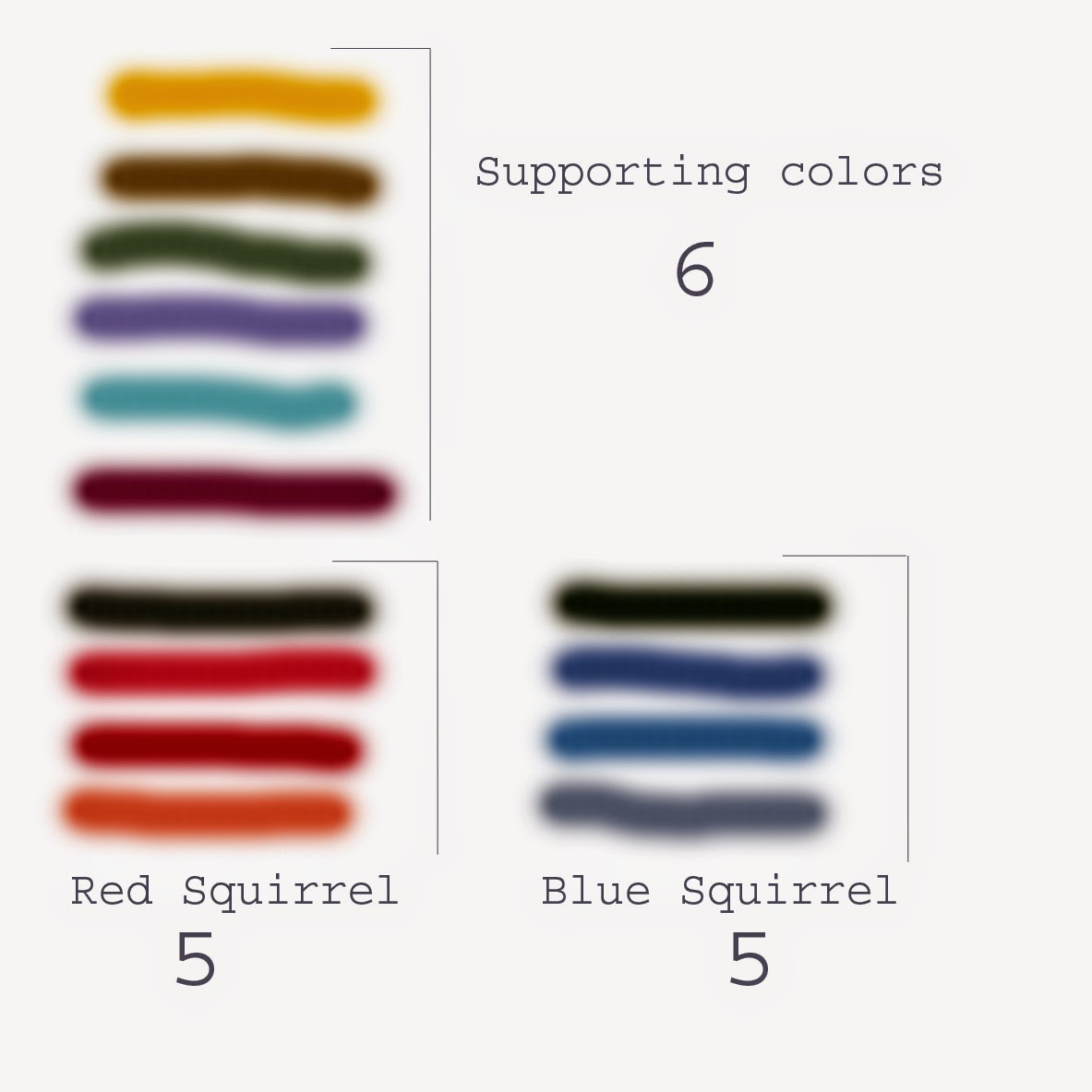 One of the times I enjoy most while working in the studio is when I'm mixing inks for my prints. Piles of semi viscous batches of joyfulness. I use a very limited palette of 6 colors to create my print colors: Rubine Red, Benzine Yellow, Reflex Blue. Milori Blue, Thalo Green and Orange (plus white).  That one less color than the rainbow.  Remember the old adage for remembering the rainbow colors and their sequencing when you were a child?  Richard Of York, Grave Battle In Vein: red, orange, yellow, green. blue, indigo and violet. On my studio shelf I have all but one color of the rainbow: violet.

With flexible putty knives, I mix and scrape together colors that can cohabitate and dance together on the printed surface. It's laborious thinking about color.  Do I want warm or cool? What value should I assign to a color? How much chroma?  Yes, there's a lot of critical thinking taking place before I start mixing the inks together. For example the violet color used as a second color to denote bark textures in the squirrel print came to me after eating a combination of yogurt and frozen blueberries for lunch. I looked at the bottom of my dish and there was this perfect shade of violet; what a great companion to be paired with the turquoise color I had already printed. 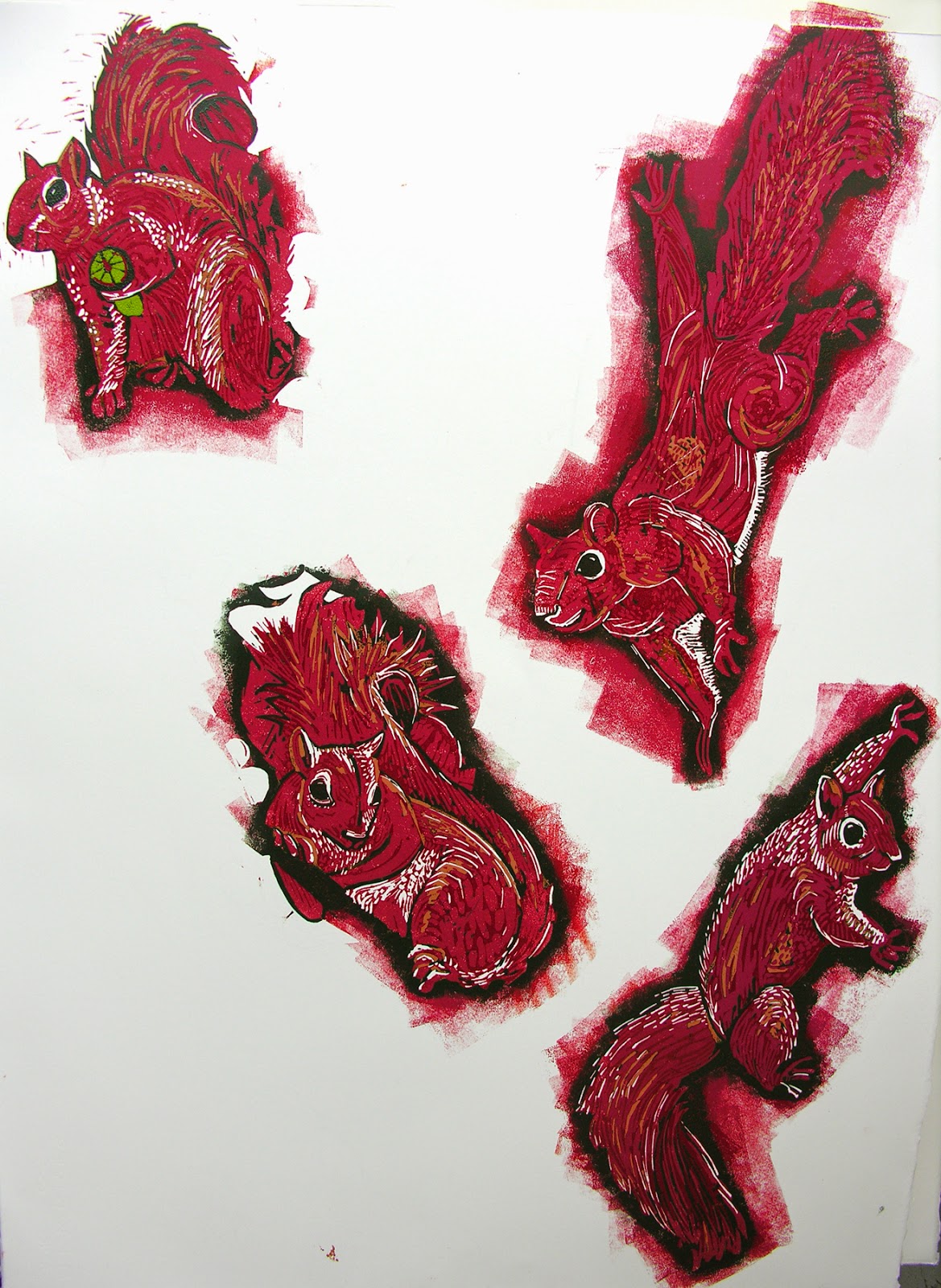 So here's a look at the print so far. There might be two more colors necessary to complete the diptych. 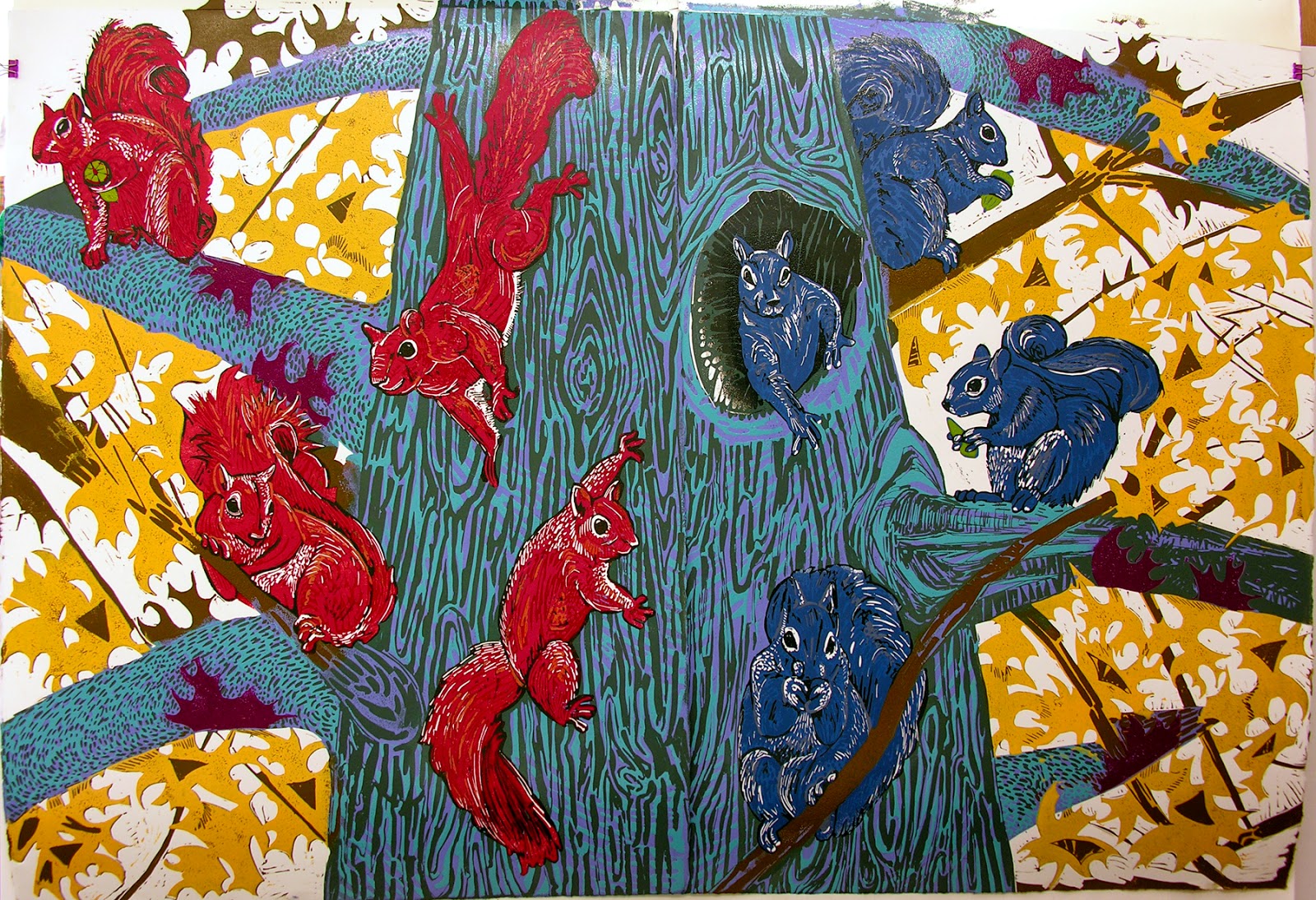 Posted by Susan Jaworski-Stranc at 9:03 AM No comments:

and so the snow continues to mound higher 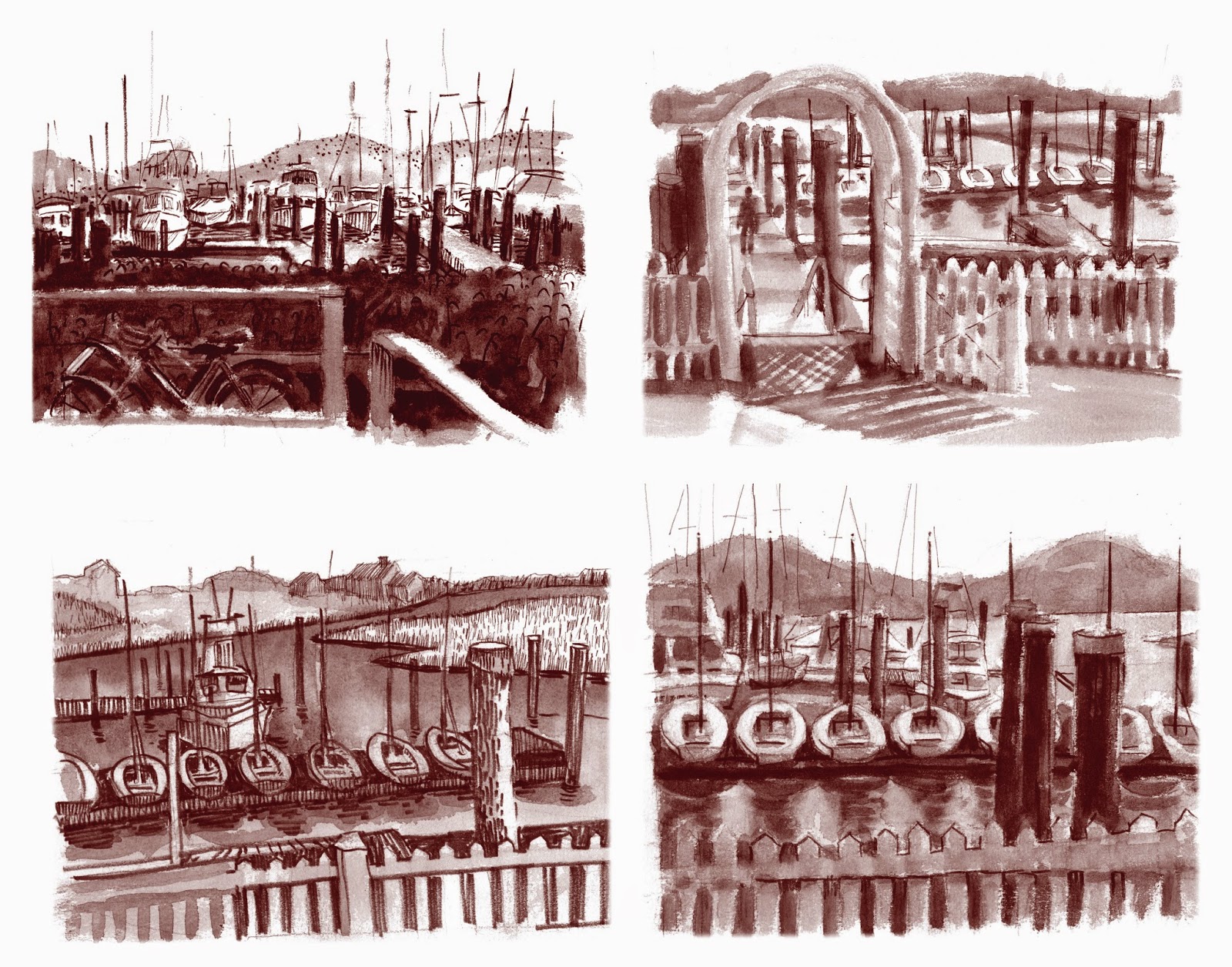 I might be developing cabin fever. Staring out my windows; watching the snow pile up… although at home I have resigned myself to completing ink wash sketches of Harwich Harbor from long ago summer photos.
Posted by Susan Jaworski-Stranc at 7:22 AM No comments: 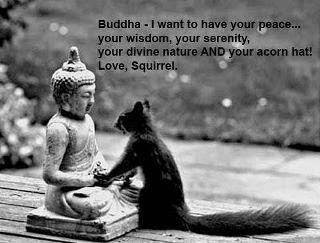 The print progress has been S-L-O-W but productive. It is in its sixth state; meaning I have printed six layers of color and it is still evolving towards perfection: (Buddhist tradition?).

I realize when I'm printing the four sets of two, 22X30: this is a lot of real estate to cover using only hand tools for carving, inking and printing. But for the love of completion I'll endure backaches, sore hands, tired feet: (Christian tradition?). 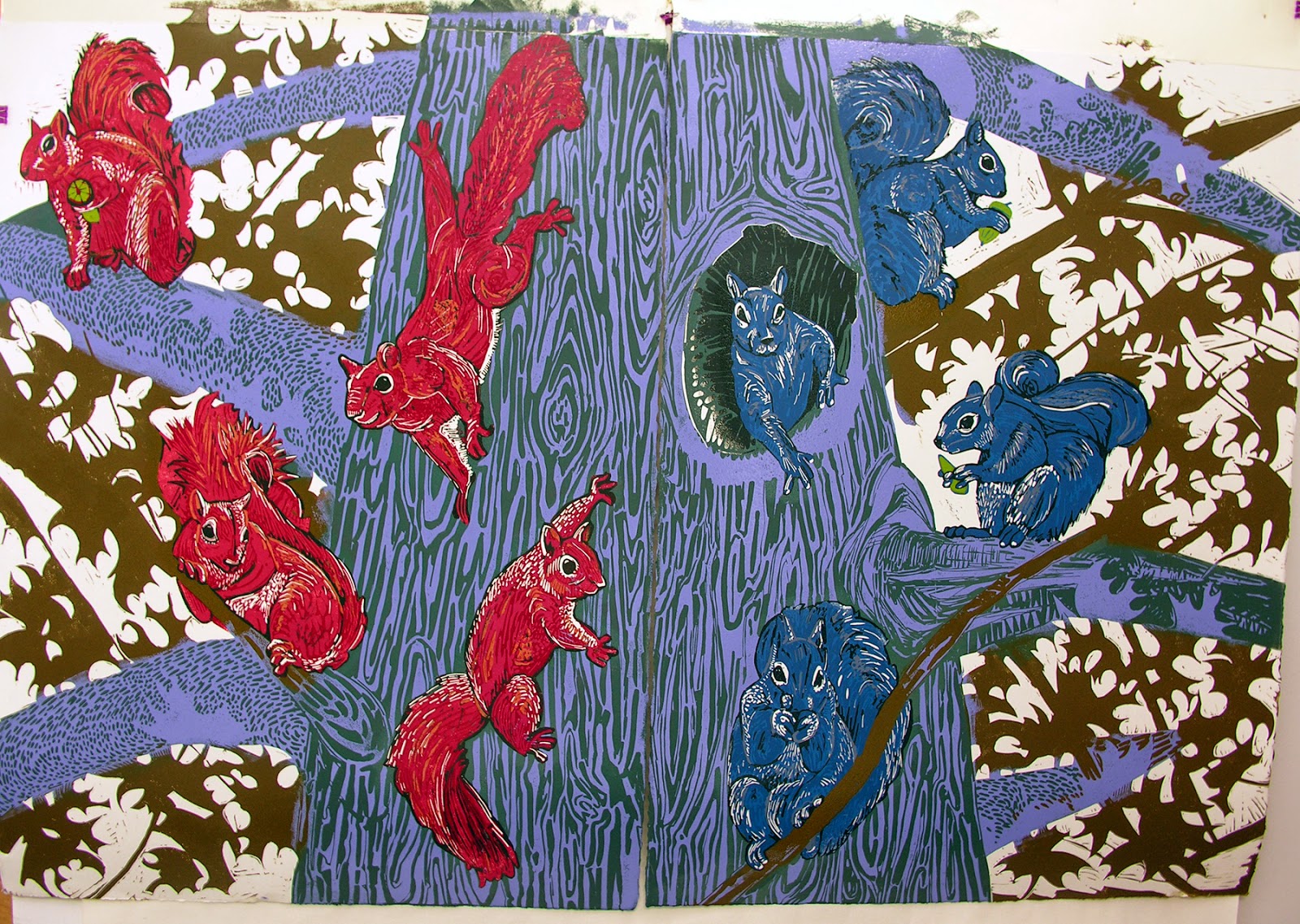 The squirrels are finished, the tree is presently being developed and the oak leaves are unfinished but will be worked on next after the completion of tree.

Here is an image of Virgin and Child by Jean Fouquet. I have always loved this image with the blue and red heavenly beings in the background and the white, translucent flesh of the earthly beings. 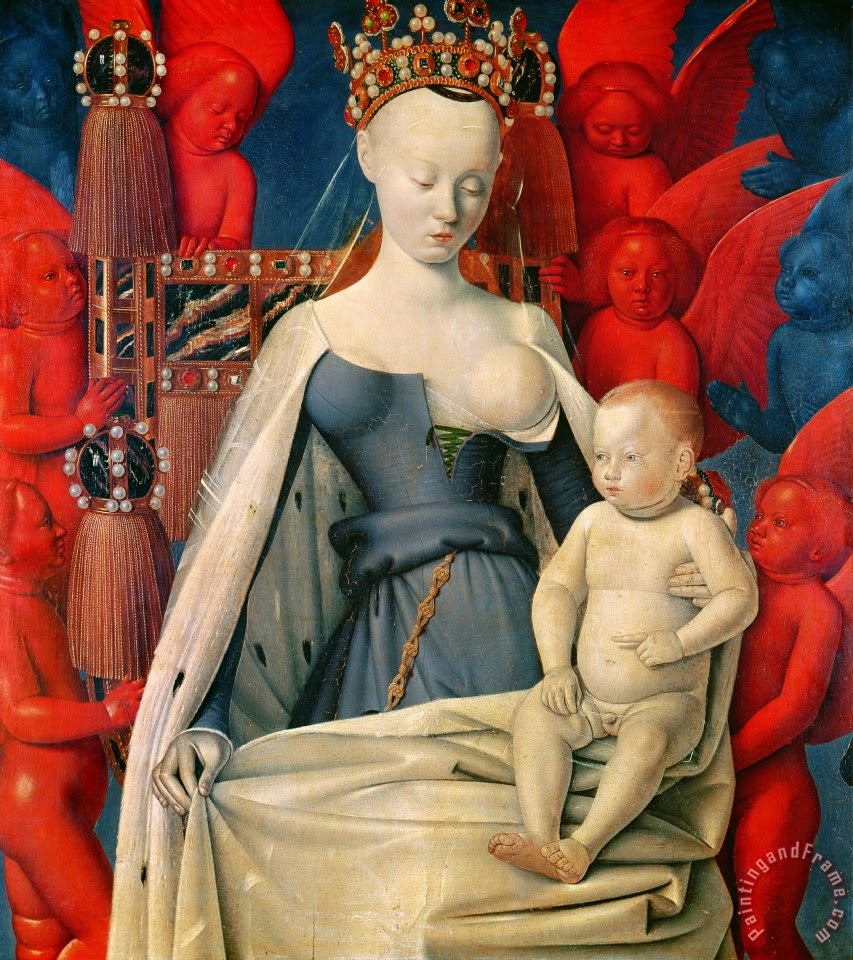 Similarities? Why red and blue colors to describe the squirrels's fur? No, they are not wingless celestial beings! They're wingless arboreal beings.

I just thought a color scheme of the three primary colors, red, blue and yellow (oak leaves to be developed in yellow) would add to the squirrelly characteristics of zany and whimsical in the over all print aesthetics.

In a month or two the printed edition should be finished and ready for my signature.

Posted by Susan Jaworski-Stranc at 8:00 AM No comments: