A couple of Summer Shows

Now through August 4, I'll have prints on display in the 9th annual “Making an Impression” print show at the Newburyport Art Association on 65 Water Street.  13 member printmakers of the Association will be exhibiting in the main gallery and the upstairs Hartson Gallery.


“Hadley Tobacco Barns” and “Forging a Silhouette of Indestructability” are two, new prints I am exhibiting as well as a number of other reduction linoleum prints.

There will be an Artists Reception Sunday July 29 , 5-7PM and print demonstrations on Saturday, July 28th from 1-3PM.  The public is invited.

On Friday evening of July 27 at the McGowan Fines Arts Gallery in Concord, New Hampshire there will be an opening for “Summer Selections” show.  “Winter Sentries” and “Blue Skies, Pink Boughs”, both reduction linoleum prints will be exhibited on the gallery walls as well as a small selection of other linoleum prints.  To see show, https://www.facebook.com/mcgowanfineart?bookmark_t=page#!/photo.php?fbid=258805915437&set=a.10150306346990438.553279.258784260437&type=1&theater


Also, "Antique Bottle; Strawberry Milk" was juried into the 3rd Biennial "footprint" International Exhibition at the Center for Contemporary Printmaking in Norwalk, CT. The show runs through September 2, 2012 http://www.contemprints.org/ccp-exhibitions 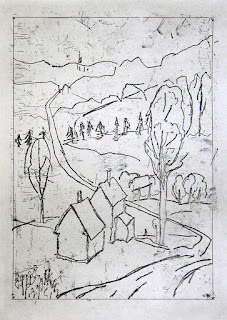 I have returned from Zea Mays Print Studio in Florence, MA http://zeamaysprintmaking.com/ where I was hard at work on a three plate color etching, the first in a series being planned called "Mountain Byways" during a five day workshop conducted by Lousie Kohrman. http://www.louisekohrman.com/

Here is my first plate called the key plate.  A simple etched line image was developed and printed in black.  This printed image was then transferred to the two remaining  plates by printing the wet print onto de-greased copper plates using proper registration methods on the press bed.

After the image was transferred to the two plates, I developed one using a deep bite etching technique with the idea of inking up the relief with a hard roller.  The other plate was developed using aquatints for tonal values.  The key plate remained the same. 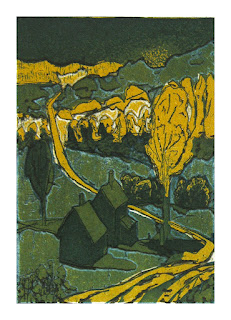 This image is the first color proof I pulled printing the three inked plates consecutively.  I reversed the order the three plates were developed by printing the aquatint plate first, the deep bite plate second and the key plate last.


The next day, I changed my ink palette to blues, reds and yellows (primary colors) An umber intaglio was used in the deep bite plate.  I also re-etched my deep bite plate for additional line development to the image's middle ground.  And on the aquatint plate, instead of a single color inking, I used a la poupe method to introduce a range of colors in selected areas.  Key plate was inked in blue intaglio. 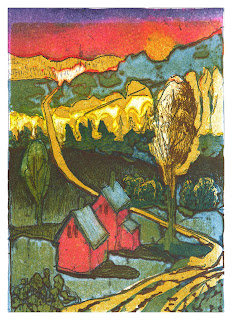 I like this second color proof very much. So to document the printing process and colors used, I printed each plate separately.  These images would be used as a reference for future printings.

Eureka!  An Epiphany!  What I had printed was not only a record of the plate image but... also the image transfer from the previous printing.  In other words I have another unique image.  (Note: the aquatint plate had no transfer image because it is the first plate to print on a blank paper.)  This is the same technique used in transferring the key plate to the other plates. 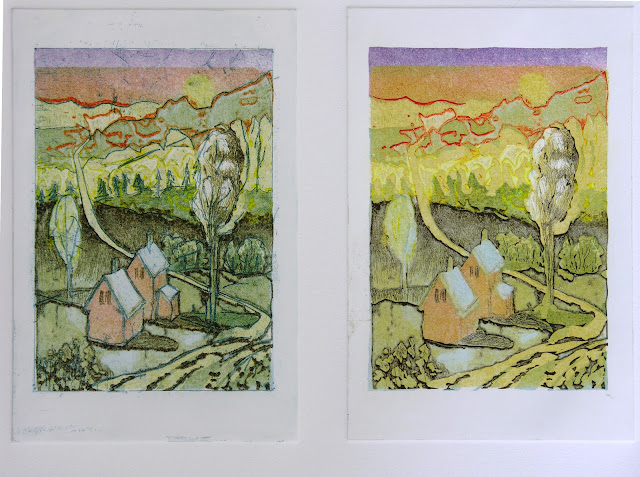 *Something to think about...these two softer versions (ghost image with previous plate image transfer) could perhaps be printed as an edition as well.