Postcards to Myself: Part 3, Jekyll Island and home

Poinsett State Park is an idyllic midland spot surrounded by acres of ugly, clear cut foresting and control burns as well as US government property used for air to ground bombing training by US Air Force.  But once inside this park it is an oasis consisting of 1000 acres of woods, ponds, mountain laurels, streams and plenty of trails for mountain biking and hiking as well as boating and fishing.

The park was developed by Civil Conservation Corp in 1934. Only 5 cabins remain as well a beautiful CCC lake lodge made with a native building material known as coquina, a sedimentary rock consisting of numerous shells and dates back to a time when the ocean reached the SC Midlands. Park ranger explained many of the cabins that were built by the CCC were taken apart and shipped overseas as living quarters for servicemen during the war.

I spent most of my time painting and drawing along the 10 acre pond and Singleton's Grist Mill remains.

I drew a lot but no plein air painting because of the fog and chilly temperatures.  The Chesapeake Campground is located across the street from the Great Ditch of Great Dismal Swamp. I visited my son, Jeremy, who lives on a boat and is employed at a marina in Virginia Beach.   I visited the Great Bridge and the Intercoastal locks systems. 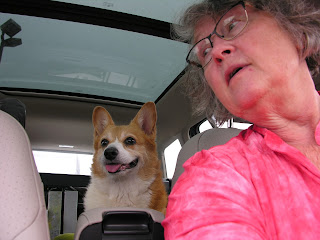 Posted by Susan Jaworski-Stranc at 9:08 AM No comments:

Postcards to Myself, February 5-16 traveling to Jekyll Island, GA 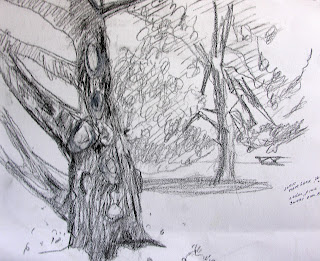 Glad I had a ceramic heater to plug into because it was a chilly 43 degrees. Covering the ground around my trailer were hundreds of spikey balls of the Sweet Gum trees.

A cozy studio cabin on the Intercoastal Waterway with no bed linens! come on...because I had a dog.  So... at night I snuggled in my down sleeping bag and dreamt of painting Bald Cypress trees and  then outdoors during the day and wrapped in a down coat I painted Bald Cypress trees with Jasmine by my side.

Suzie Winters and I had dinner together in Myrtle Beach.  We practiced 'laugh and giggle' therapy to relieve our personal emotional pain and stress... Laughter and friendship: so good for the soul. 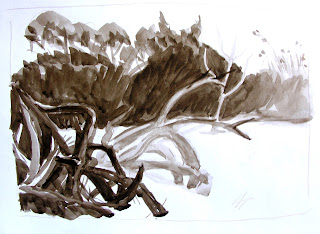 Although Jekyll Island is a state owned barrier island with very restrictive development, it has a historical town center, a sea turtle rescue center and easy access to hundreds of beautiful beaches and other sites via of walking and bike paths.

Driftwood Beach and the Fishing Pier were two of my favorite spots to paint.

Dressing for island weather can be a challenge for this time of year: some days were foggy and cold, some days warm and humid. Fortunately, I was prepared for both. 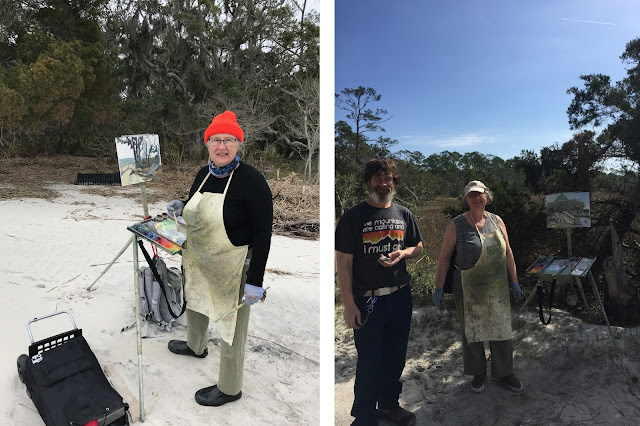 On Friday afternoon Mary Byrom and I packed up our gear and drove an establishment called Maple Moon Farm. http://www.maplemoonfarm.com/  locate in the beautiful rural Maine town of Lebanon. Mary was invited by the owner to come and paint the new sugar shack. 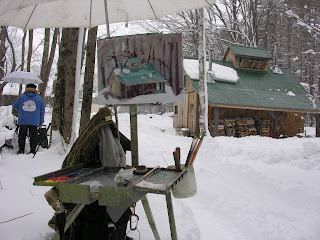 Frank, the owner of farm, is a part time physician's assistant in Newburyport and spends his other time managing and operating the 130 acre farm complete with a sugar bush, apiary, chickens and an airBnB.  We also had the opportunity to meet his very sweet, rescued Bull Mastiffs (3) and a German Shepard.

With about 18 inches of snow on the ground, we stomped through and followed tractor tracks to a spot where we had a great view of the sugar shack surrounded by many maple trees which were tapped and hung with sap buckets.

With more snow falling, our umbrellas went up to protect our easel and palette while we painted.  At last the paintings were complete. We shook off the snow dustings from the umbrellas and began to packed up our gear. 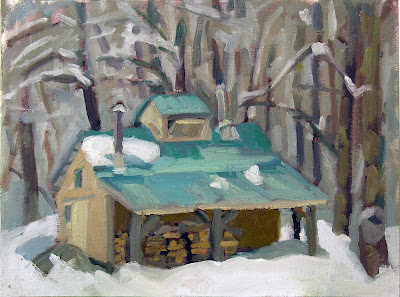 At the same time, Frank came out with a small pot of hot maple syrup and poured the hot, golden liquid in a bowl filled with packed snow and made us some 'sugar on snow' .

Now that was a memorable and delicious way to end a day of winter painting.

Posted by Susan Jaworski-Stranc at 3:19 PM No comments:

I am home from my camping/painting, three week, 2900 mile journey to Jekyll Island and back.  The trip was absolutely the best experience I have had in a long time. 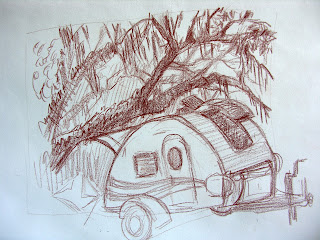 There were three things going for me as I traveled about.  I was living out of a Tear Drop trailer (intriguingly cute), I had corgi companionship (super cute) and I am an outdoor rugged painter (OK, not so cute).  Having these three observable traits opened a path to engagement with so many awesome people of all ages, races, political (and musical) persuasions: an off the grid, nose to nose experience. 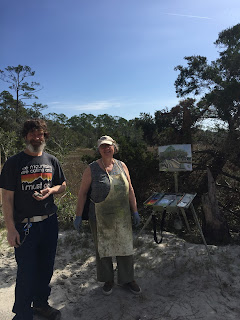 I traveled along side a Grey Wolf, Arctic Fox, American Eagle and a Big Horn (names of RVs) and camped next to a Burro (tiny travel trailer from Maine). I gassed up at WAWA's and dined on WaHo.  Some of my nights were comically, illuminated by green facsimile fireflies swirling in, on and around my trailer by a neighbor's  motion pattern LED laser light show. In Carolinas, I was passed by a tractor trailer rig with the company name of TRIBE Transportation.  The only trucking company owned by an Native American woman. Her name is Joy Cain Handte and she is of Cherokee descent. Her great grandmother survived the forced removal migration known as the Trail Of Tears of 1830's.


While in the Virginia Beach area, I visited the Mackay National Wildlife Refuge. A lovely blue sky day, tripping past Confederate flags, trailer parks and wildlife refuge signs rendered unreadable by buckshot. Along the highway, I spied in the distance a gigantic, white marble statue in a expansive farm field. I made a U-turn to investigate.

The Perfect Wisdom and Great Compassion Zen Garden.  "May all living beings be well, happy, peaceful and secure."  (THANK YOU Bonny Bright and the Nguyen Family). In addition, the garden was filled with bluebirds.

I played old time fiddle at a jamming' session at Jekyll Island campground.  Once a week on a Thursday evening, the winter residents gather together in a circle to play, sing, tell stories and just have a good time.  I was invited to join them.  When I expressed my shyness and explained I never played in front of an audience, Brian told me the story of a fellow who joined the group one evening and just held his instrument in his lap. OK. I'll be there... when my turn came I played... in front of 60 people... and they clapped...  In that evening's jammin' circle there were two accordions, a banjo, lots of guitars, percussion, tambourines and the first fiddler (me) the group ever had. I was enthralled and empowered.

At the beginning of my trip.  I stopped at a rest area on the New Jersey Turnpike and was walking to the building when I heard a voice repeating, "oh Miss, Oh Miss" from behind.  A black gentleman had rolled down his car window and motioned me to him. I approached. I observed the interior of his car looked like Fibber McGee's closet. He said, "You know your trailer tag is hanging by one bolt?" "Really?" I told him my son-in-law had attached an artsy designed frame around my trailer tag (Christmas gift from my friend Terry) I'm guessing not tight enough.  So he reached into his back seat and handed me an electrical tie and then on second thought he gave me two just in case the other bolt falls away.  I said, "God Bless you!" I thought of that kind man at the close of my trip when I looked around the interior of my car and thought... another Fibber McGee's closet.  Safe travels, my friend/s.