the lighthouse, the artist and the widow

There are 68 lighthouses in the state of Maine. None are more famous  than the lighthouse affectionately called, The Nubble.  It is located on Nubble Island in Cape Neddick, York, Maine. Today was a typical day with touring buses and a parking lot filled with cars, off-loading visitors by the hundreds in Sohier Park for a glimpse and a photograph or two of the iconic American lighthouse.

Tripping through the Universe,  the robotic spacecrafts, Voyager 1 and 2, houses 12 inch golden phonographs  containing a wealth of information describing Earth and the human race.  A photograph of the Nubble Lighthouse was selected alongside other iconic structures like the Great Wall of China just in case ET makes a rendezvous with the spacecraft to learn something of Earth.

But here along the ocean's water edge, the lighthouse has important symbolic meaning.  It is a symbol of safety during intense hardships. It can also represent a strong, singular person standing tall against unrelentless, brute forces of life. This may explain why lighthouses are so popular in tourism, photographs, paintings and written works.  In the face of adversity, it shines a light toward salvation.

I found my viewing spot not alongside the hundreds of visitors but at a 'closed for the season' ice cream stand a couple blocks away up on a hill. Other than the sighing of deep regret and disappointment expressed by strangers who had approached the closed store in search of a cold cone delight, I was quite content to paint the lighthouse from this vantage point.

While painting here though I began to wonder if ice cream stands could be lighthouses too; symbolically speaking.
Posted by Susan Jaworski-Stranc at 11:00 AM No comments:

A plein painting trip to the Catskills


Whoever has made a voyage up the Hudson must remember the Kaatskill Mountains.  They are a dismembered branch of the great Appalachian family, and are seen away to the west of the river, swelling up to a noble height and lording it over the surrounding country.  Every change of season, every change of weather, indeed, every hour of the day, produces some change in the magical hues and shapes of the these mountains and they are regarded by all good wives, far and near, as perfect barometers.  When the weather is fair and settled, they are clothed in blue and purple, and print their bold outlines on the clear evening sky; but sometimes, when the rest of the landscape is cloudless, they will gather a hood of gray vapors about their summits, which in the last rays of the setting sun will glow and light up like crown of glory.

A dear painter friend and I stayed at the Greenville Arms 1886 Inn in Greenville, New York, for our 'artist retreat' painting trip.  Kim LaPolla,  fiber artist and director of the Hudson River Valley Workshops and her husband, Mark LaPolla, Chef de Cuisine and Chocolatier cater to artists in an all-inclusive environment meaning Kathy and I were in good artistic company, well fed, well cared for during our week long painting adventure in the Catskills.
http://www.artworkshops.com/index.html 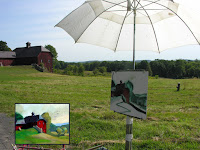 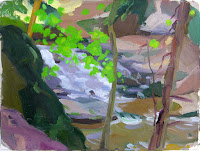 We were once buzzed by a drone operated by SUNY scientists studying the growth of trees at Lincoln Pond.

We took afternoon swims in nearby ponds, clandestinely because swimming was not allowed.

Egrets, egrets and lots of egrets

Thursday, my painting group met up at the end of Stackyard Road in Rowley, in an area called The Great Marsh.  The skies were a deep cerulean blue with numerous cumulonimbus clouds floating along.
What overwhelmed all of us upon our arrival were seeing hundreds of white egrets milling around in the brackish pannes of the marshes.  In the large gathering were Great White Egrets, largest species with black legs black feet and a yellow-orangish bill, Snowy Egrets, smaller in scale with black legs, black bill and yellow feet and a lone Great Blue Heron.  Most likely they were gathering together before heading to their wintering grounds. All of us agreed one may see a couple of egrets hunting for food in the wetlands but not hundreds like this late summer gathering.  This sighting was magical. 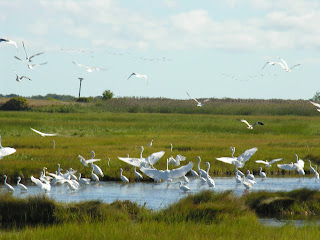 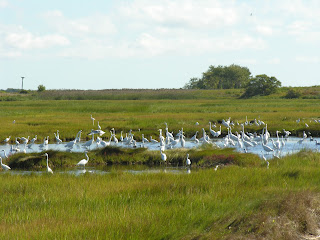 Just think... these beautiful birds were hunted close to extinction for their plumage to decorate women's hats in the 19th century.  In 1890 five million birds were killed annually for the fashion industry. The National Audubon Society was formed in 1895, New York State's Audubon Plumage Law (1910) banned all sales of birds and US legislation such as the Federal Migratory Bird Treaty (1918) helped to put an end to this avian travesty.  Today all of us can enjoy the privilege of watching these spectacular birds grace our landscape and our imaginations as was experienced by the plein air painters. 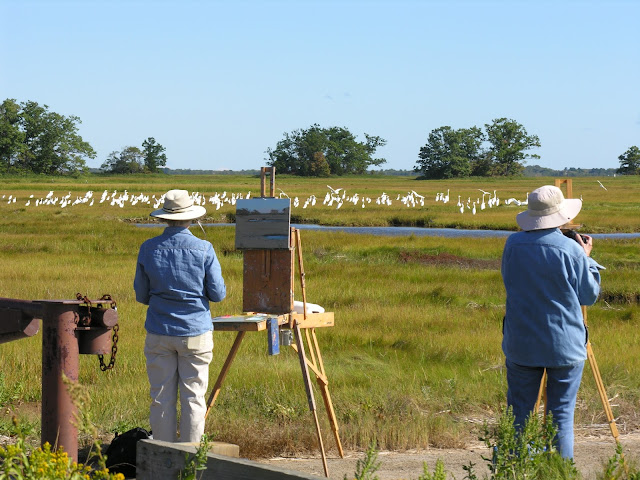 Posted by Susan Jaworski-Stranc at 3:16 PM No comments: