Eleven years ago I formed a printmakers' group and every year since, there has been an annual print show, "Making an Impression".  The exhibit showcases many different talents of and techniques used by local printmakers while promoting the art of prints to the general art viewing public.

And so another show gets under way next week at the Newburyport Art Association on Water Street coordinated by this year's Chairperson, Kate Higley, a New Hampshire printmaker.

Please join us as we celebrate our creative endeavors with a reception and public viewing.

Here are two new linoleum prints I have created for the show: "Up and Over" and "Keep a Look Out". 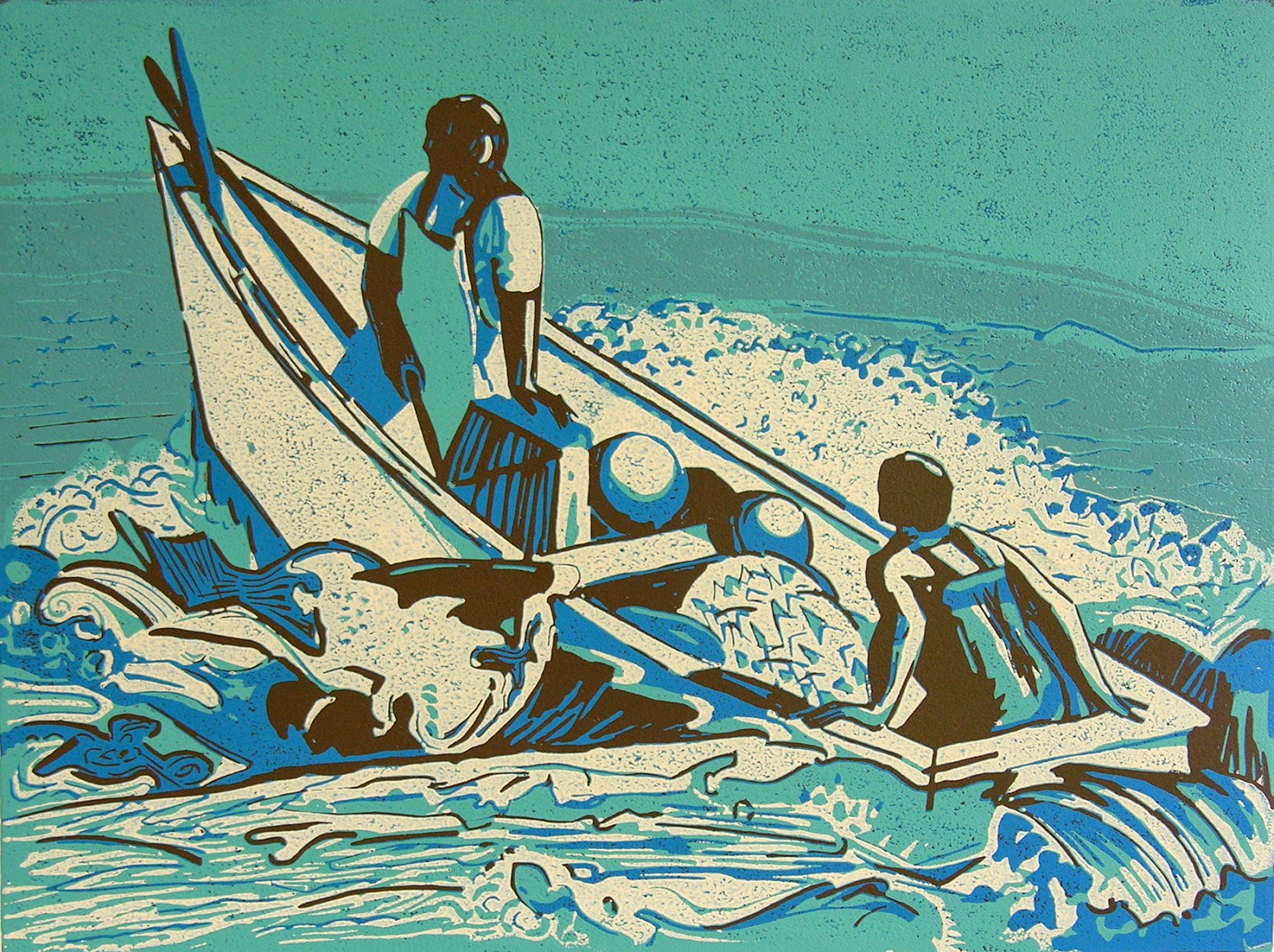 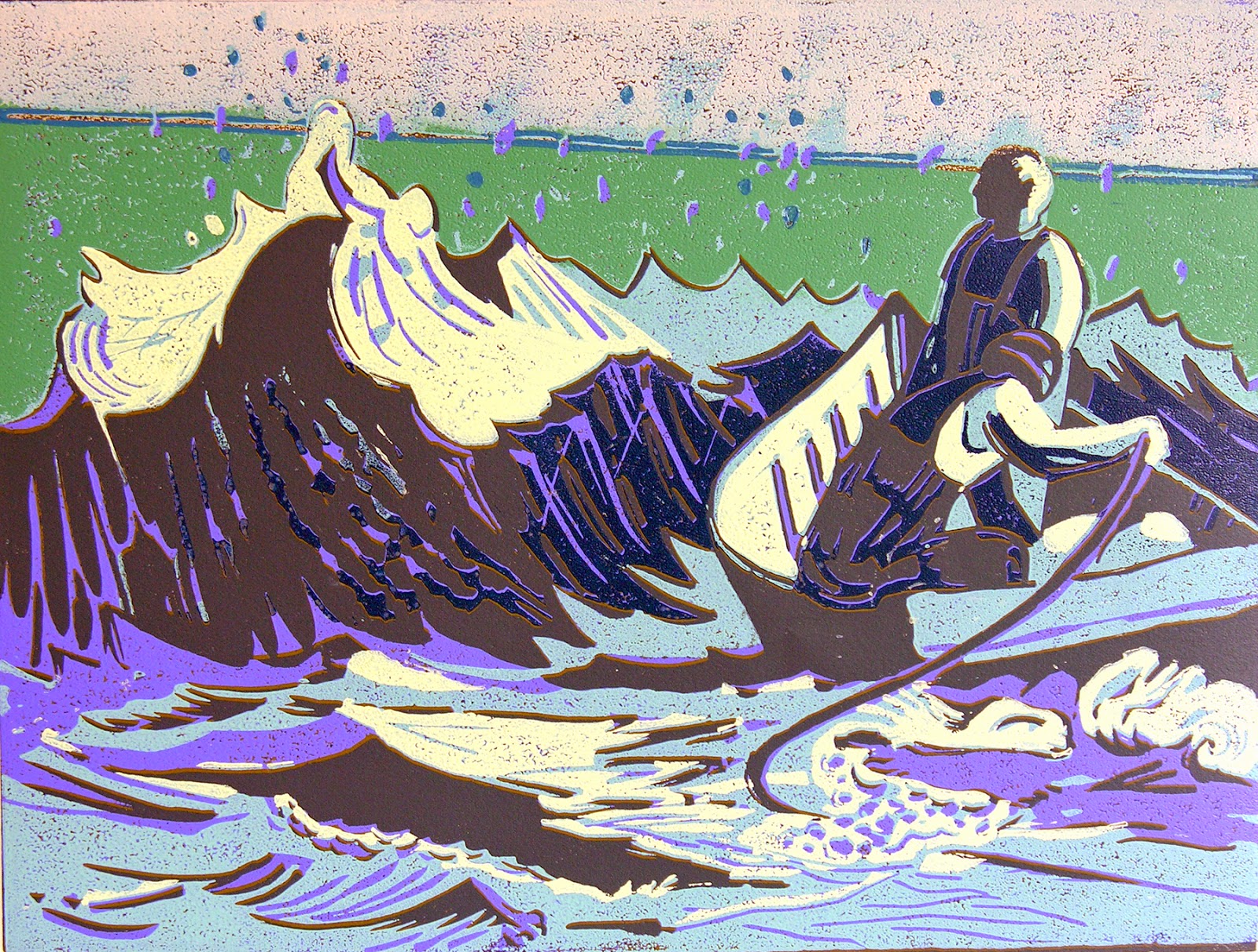 Recently, I viewed the beautiful J M W Turner and the Sea exhibition at the Peabody Essex Museum in Salem.  The inventive renderings of the raging emotional personalities of the sea by so many accomplished painters gave me pause to reflect on how I went about rendering the agitated sea  in these two prints. 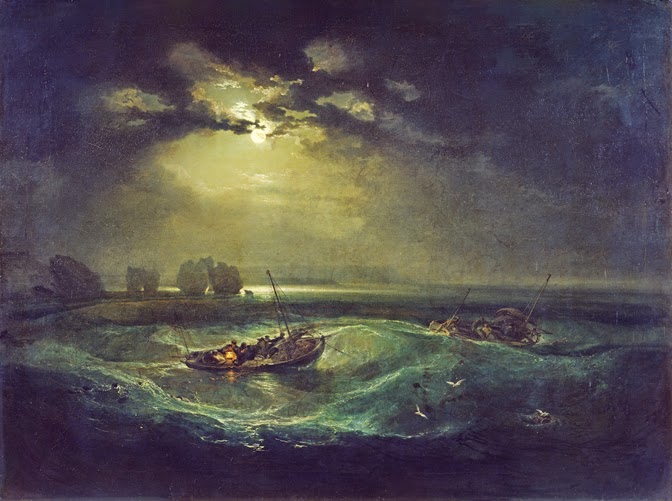 Just before exiting, in the last room,  John Singer Sargent depicts the raging Atlantic Ocean in this painting: 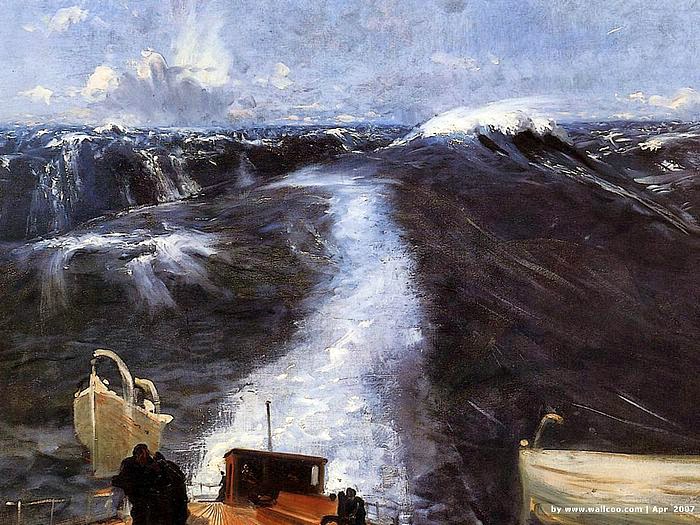 If you could only inquire of my painting friends if any of these images accurately reflects one ominous ferry ride to Monhegan Island. With our feet high up on the metal  railings watching with trepidation the whale like blow hole waters explosively entering through the boat's scuppers while we tried to weld our butts to anything that didn't slide, we pitched to and fro among the ocean's crests and troughs. We were quite relieved to have this ferry ride end and safely deposited on the wharf of Monhegan Island..  The sea can be so exhilarating!
Posted by Susan Jaworski-Stranc at 7:50 AM No comments:

This past week I taught printmaking to a group of Lowell  kids, ages 9-14 in a summer program called, "Art with Artists".  This children's art program was funded by a Parker Foundation grant written by my good painter friend, Meredith Fife Day, the program's coordinator.

The kids looked at and talked about artwork created by the likes of Andy Warhol and his silk screened print, Brooklyn Bridge, Katsushika Hokusai's View of Mount Fuji Under a Bridge, The Pont du Gard Roman Aquaduct Over the Gard River, Avignon, France and Landscape with Bridge by Paul Schamberg.  I presented my plein air oil paintings of bridges as well.

While sorting my own painting to prepare for class, I was surprised just how many bridge paintings were in my inventory.  I have always been attracted to the water's edge and boats of all kinds and so there should be no surprise to see a bridge crossing over streams, rivers and marshy areas where I have set up my easel.

Stone, wood or steel, each bridge is an engineering amazement: some are linear in design, others solid shape construction.  I must confess, I have never been attracted to Jersey Barrier bridges. Ugly! What a bane to the aesthetics of bridge design. 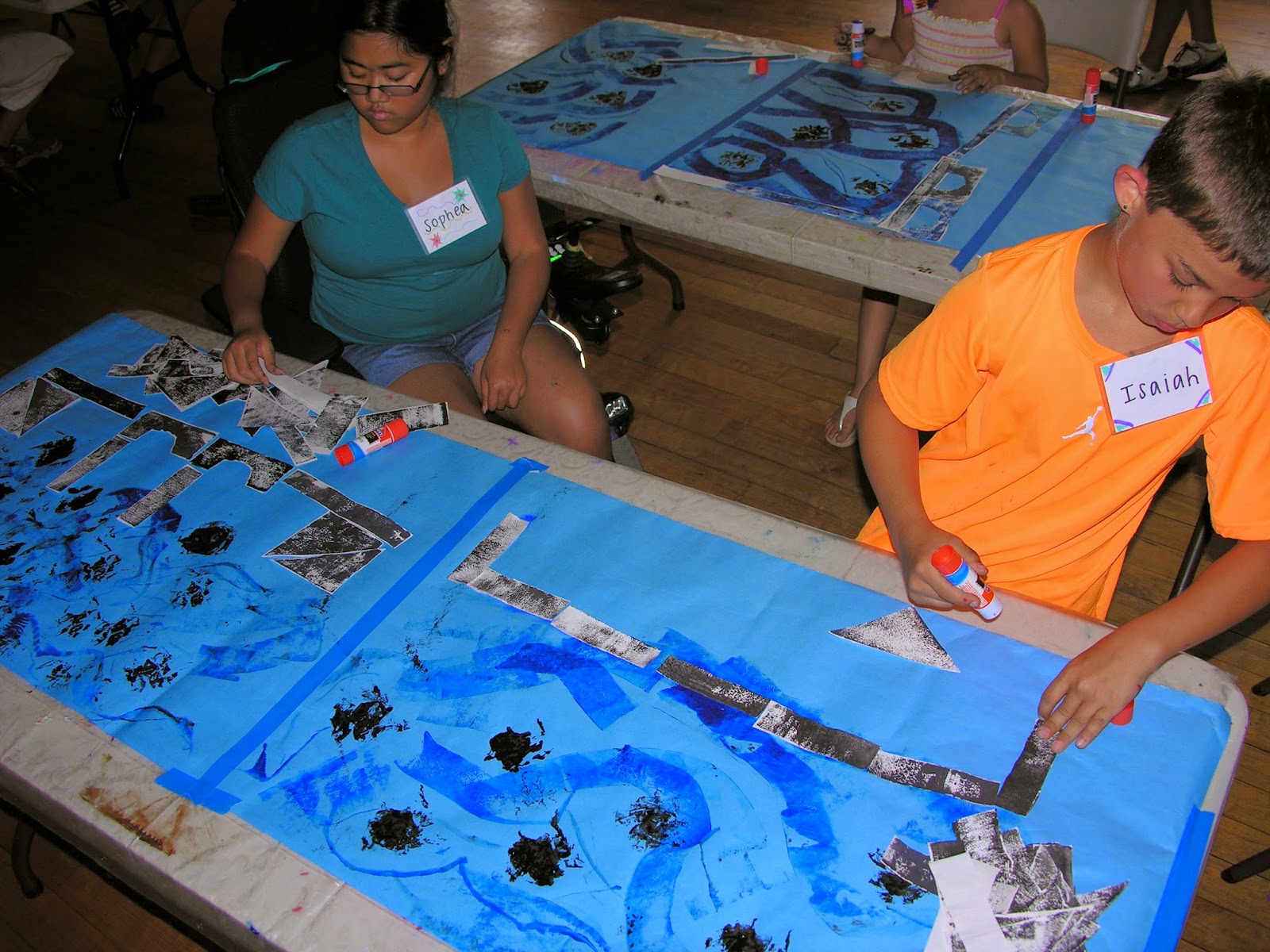 The photos to the left are "Art with Artists" participants enjoying their 'printmaking' days. 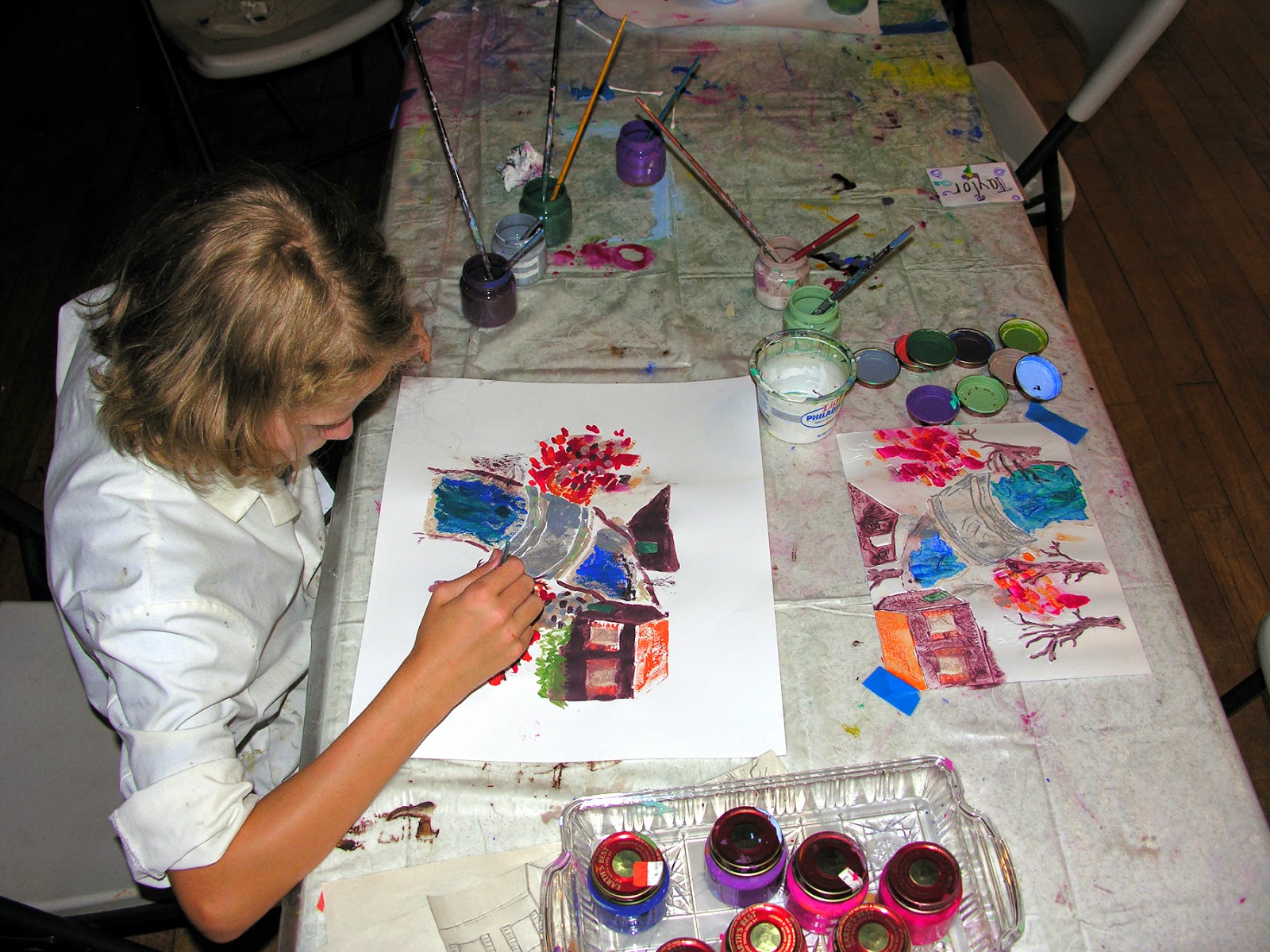 Posted by Susan Jaworski-Stranc at 8:53 AM No comments:

On this year's fourth of July, Hurricane Arthur did not dampen the start of Chelmsford's 47th Annual Independence Day Parade. Good news for the Lowell Humane Society's (LHS) float participants. 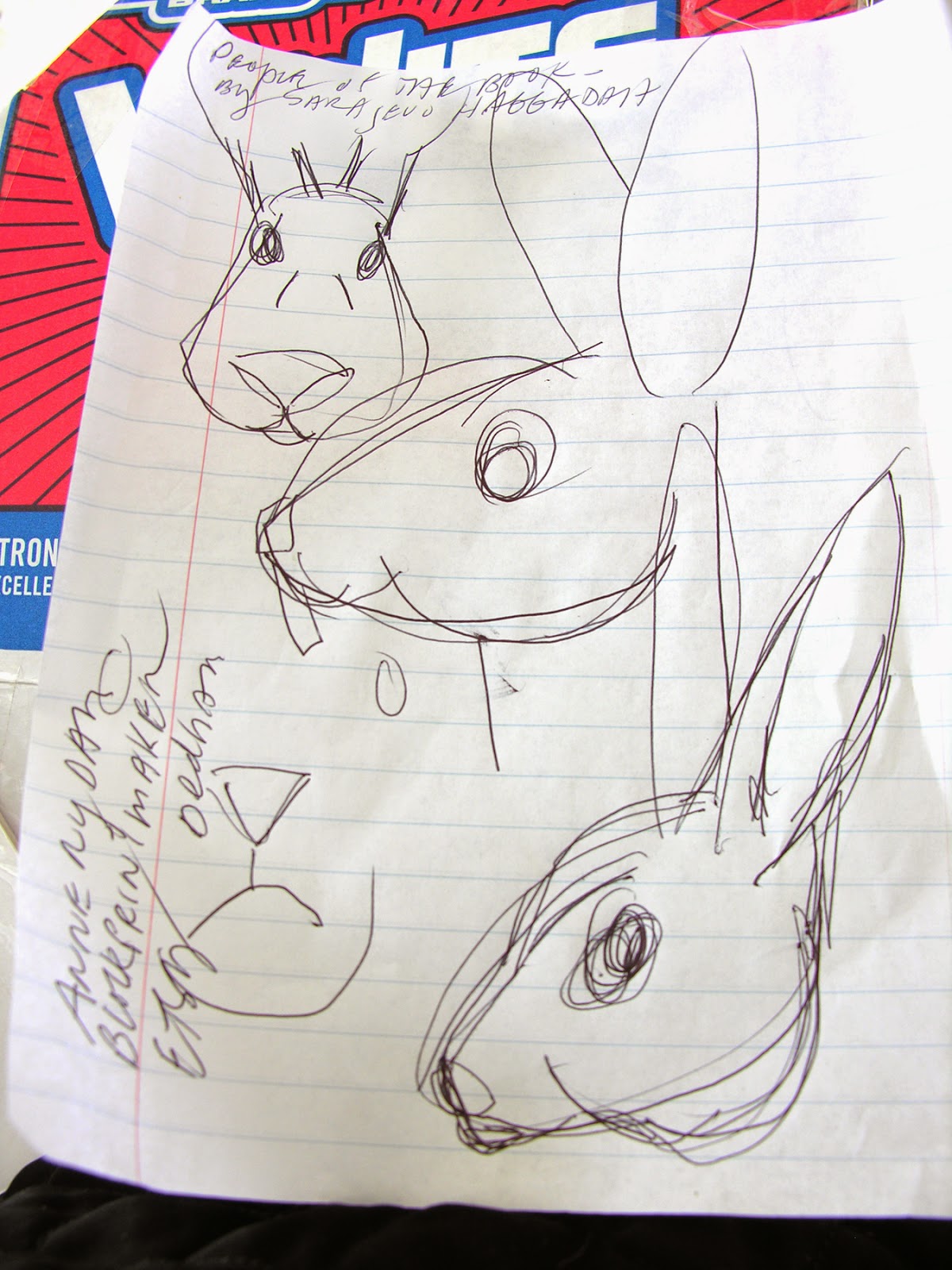 A while back a call for artist volunteers came through  my Western Avenue Studios Yahoo mail from Crystal Arnott, Director and children volunteer coordinator at LHS.  The kids were looking for artists who were willing to volunteer their time to construct large heads of a cat, dog, bird and rabbit for this year's float entry in a local parade.

Their float theme of "Mt. Adoptmore" was indeed clever and a creative choice. The cat, dog, rabbit and birds represented the animals offered for adoption at the shelter. These animals would replace the presidential heads of Mt. Rushmore.  Clever!

Of course I was interested but I was up to my eyeballs in work and commitments like so many of us.  So I waited two weeks and inquired of Crystal how things were going and hoped she had enough volunteers.  Sadly no one came forward. My heart tightened. I reasoned with myself... her call was two months in advance of the parade... no rush. They didn't want the heads yesterday (like most calls for volunteer work), so I gladly answered their request. I had a blast making these heads. 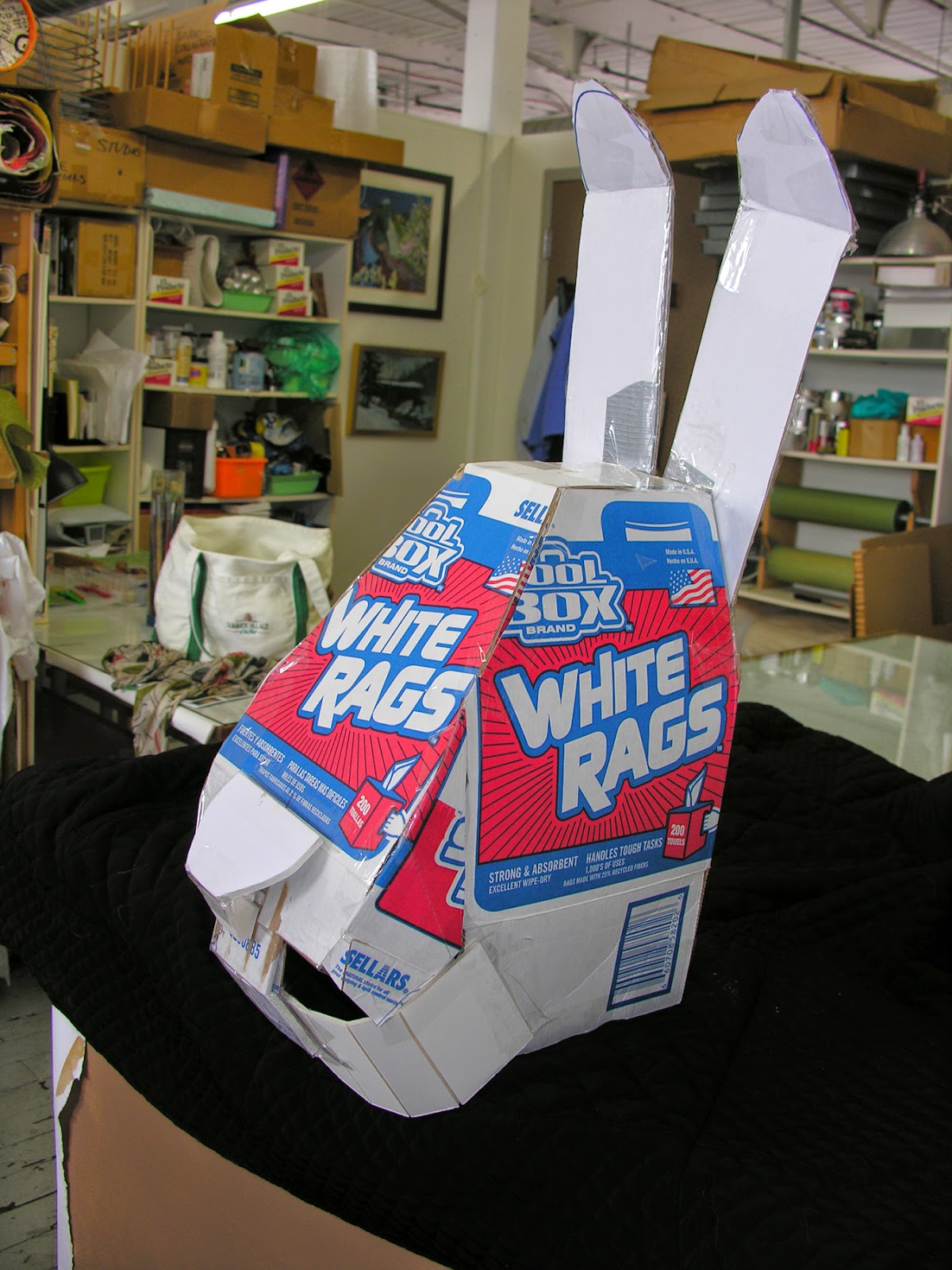 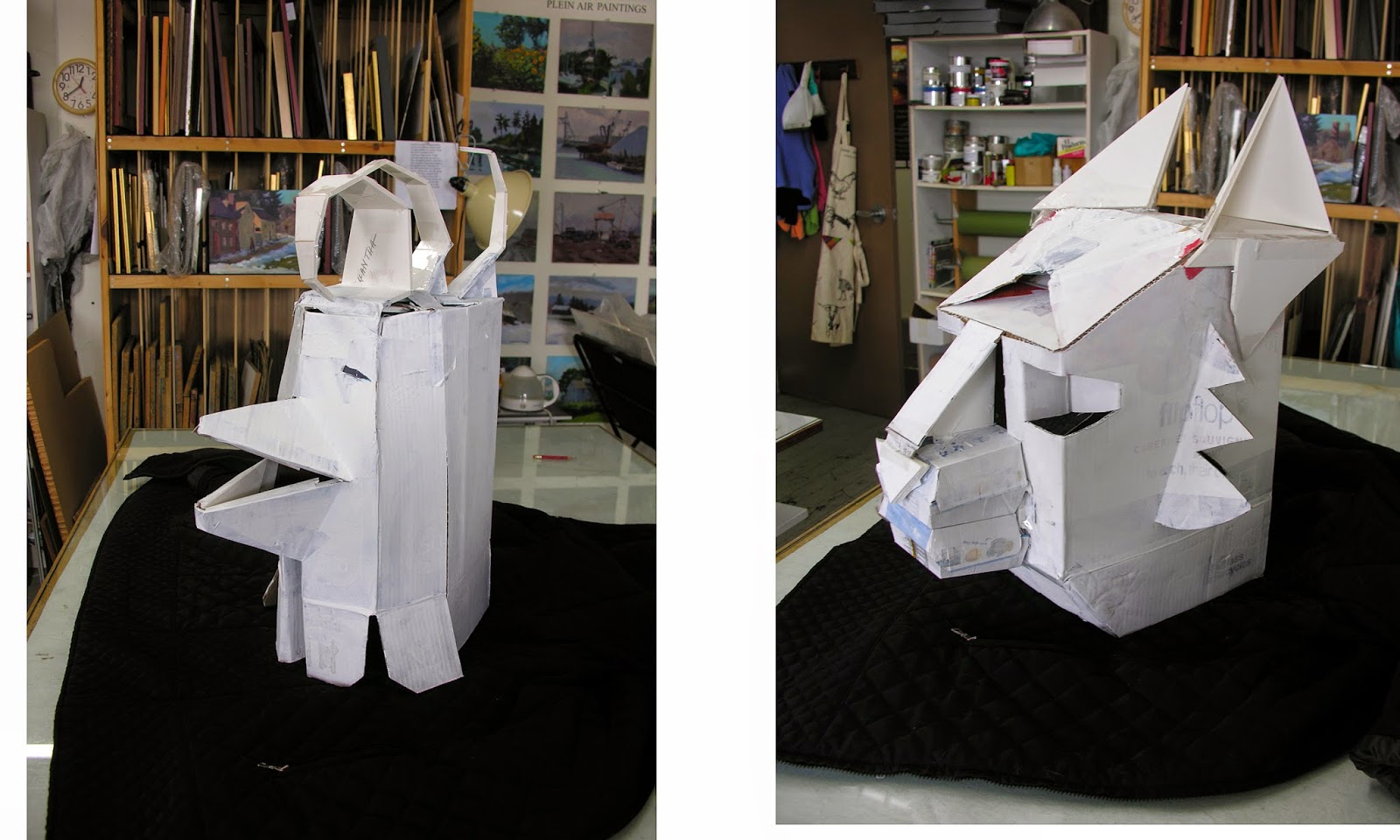 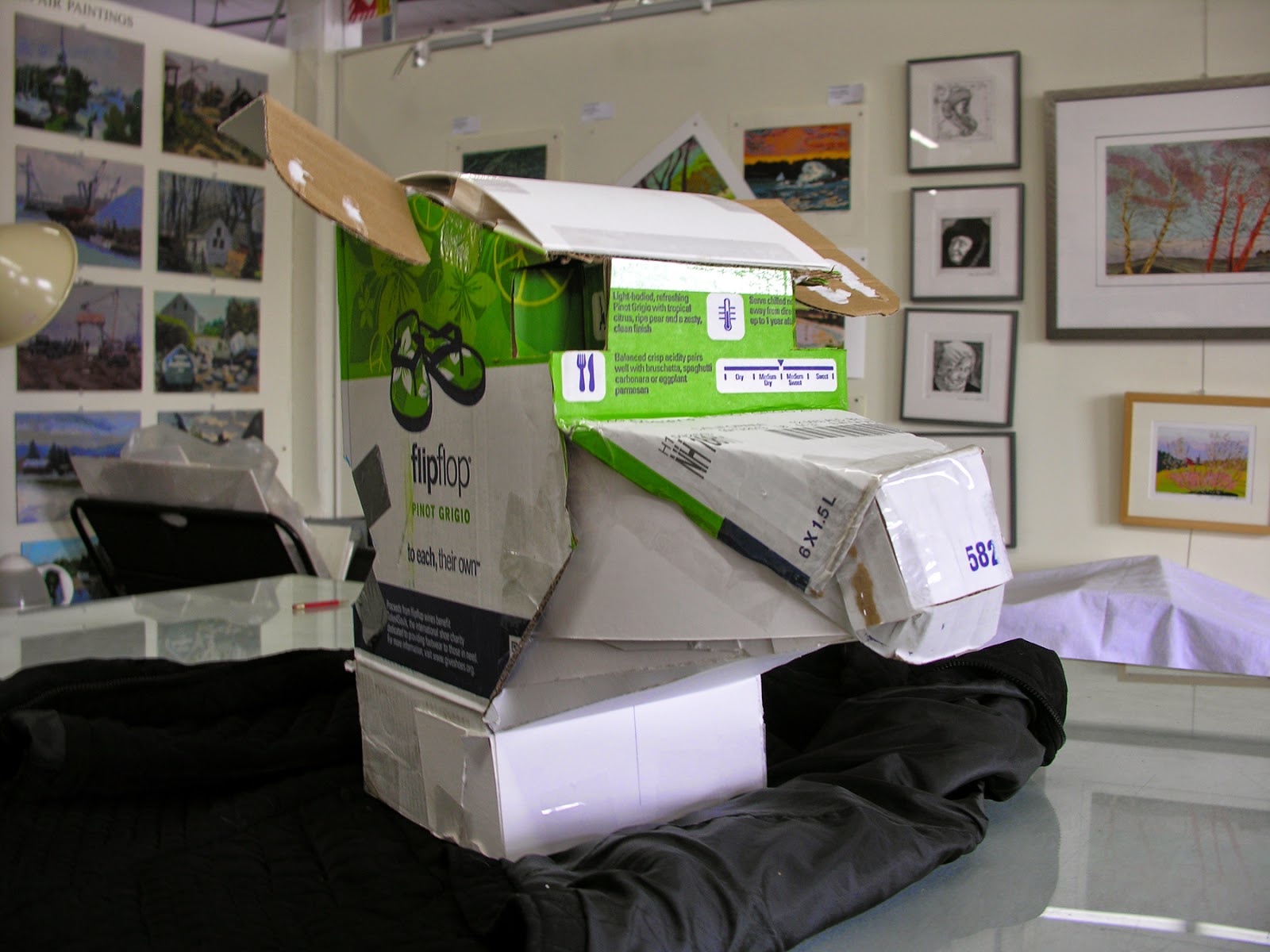 I used cardboard boxes from a local package store as well as an empty studio rag box. I formed the heads by using a few origami techniques such as scoring, folding, reversing folds with the additions of smaller sized boxes, foamcore and duck tape.  These materials would serve as a strong foundation when I cover the surfaces with multiple layers of gooey paper mache.

The heads took a couple of on and off work weeks. They look terrific for not having any set plans to form the heads from cardboard boxes.  I put a final coat of Kilz paint to seal the paper mache just in case of rain which could turn the masterpieces into a heap of floury mush.

I delivered the heads to the shelter and the kids were delighted with the results.  They quickly began work, dipping brushes into donated acrylic paints and turning the plain heads into colorful strokes and patterns.

I couldn't stay long to watch the gals finish painting and sadly I couldn't watch the parade either but I'm sure everyone had a good time.

Here's my studio version of Mt. Adoptmore placed on the bed of my press before handing them over to Lowell Humane Society.

Take a look at these faces and find a place in your heart for a sheltered animal.
http://www.lowellhumanesociety.org/index.php/adoption/available-pets/ 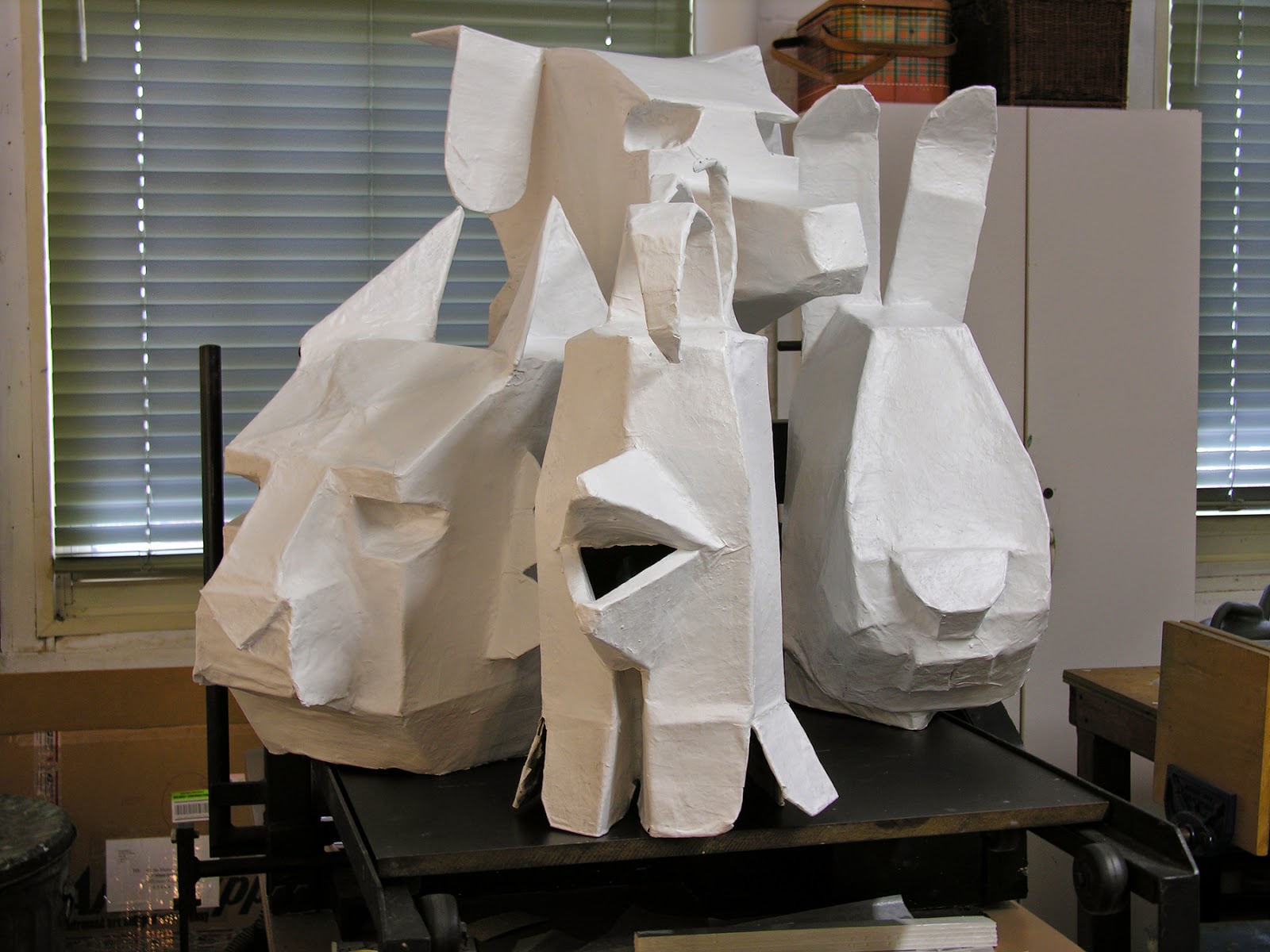 Posted by Susan Jaworski-Stranc at 9:28 AM No comments: