Liquidating three properties in 14 months, of which one was my own, has been an exhausting task. This phase I'll call 'binging on purging' .. eliminating stuff accumulated over decades of living and collecting by my loved ones... is over.

Farewell! Angel of Death.  My dark, heavy companion and I have split ways, for awhile any ways. I am confident, we'll see each other soon enough.

So with this respite, I have decided to purchase a T@G trailer.  Here's a pic of my RIG. (Isn't ironic after purging a ton and half of possessions I go and buy something else).

So my first 'shake down' was traveling to the Grand Isle State Park Vermont to camp with my very good friends, Mary and Jan. This area is known as the Lake Champlain Islands.

Everything went great except the weather.  It rained every day except for my travel day. Starting an evening camp fire began an hour and half before an enjoyable fire could be sustained.

Presently I’m drying and wringing out. Otherwise the trailer and car performed beautifully… and so did I.

I mostly sketched from the back of car and sometimes from the front seat with wipers on.

One outing, when I heard thunder over my shoulders and saw the thickening clouds I began hurrying to pack up my painting gear.  At the same time four rugged fishermen (you know, the ones in camouflage rain gear) landed their boat and asked, weren’t they pretty enough for me to paint. 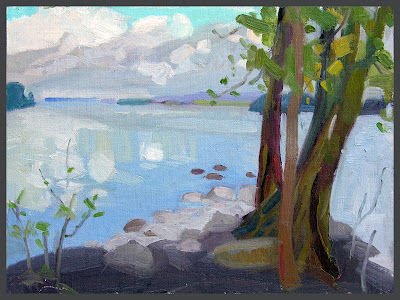 Posted by Susan Jaworski-Stranc at 4:28 AM No comments: