Painting on the North Shore with N10 friends 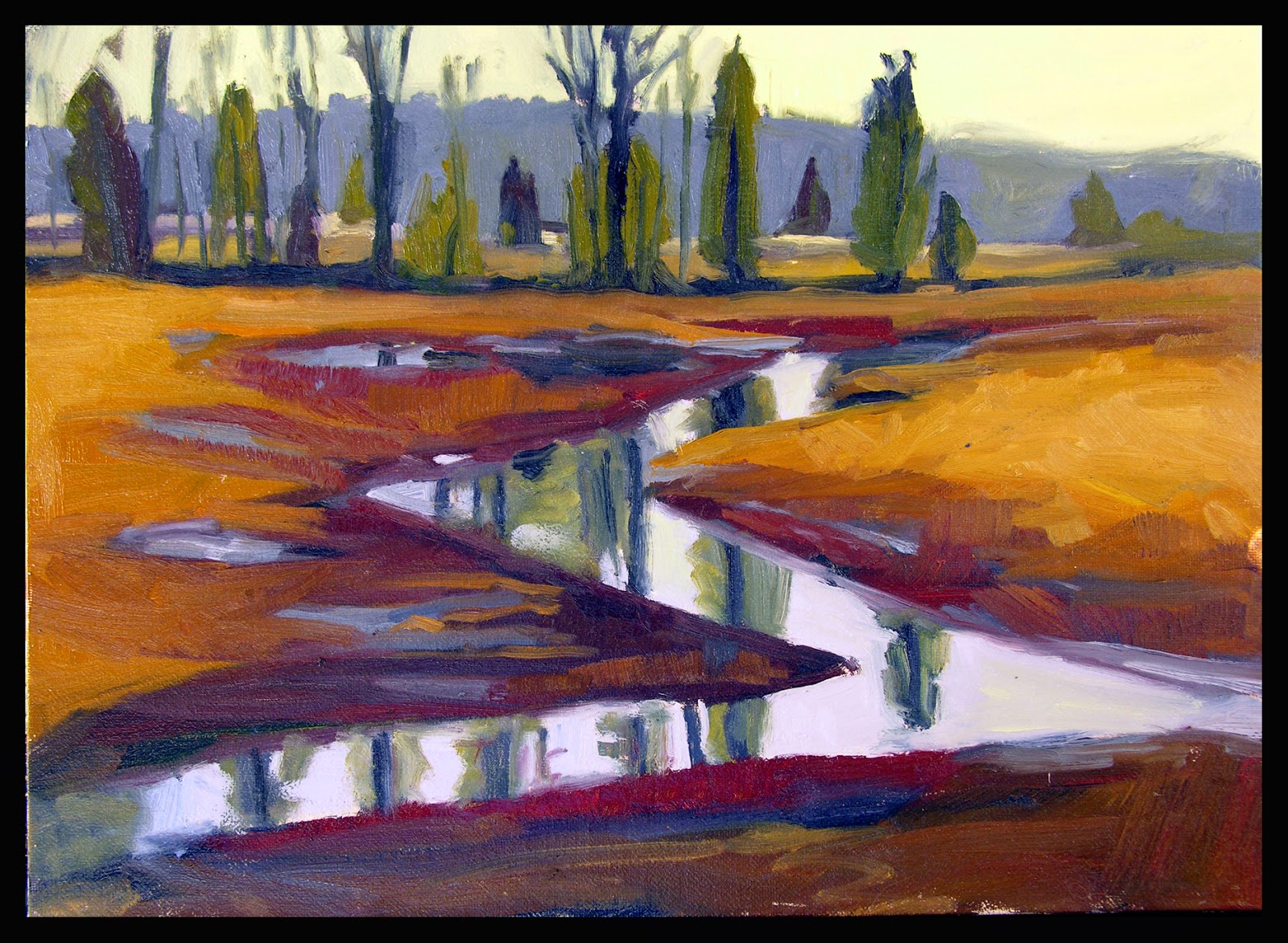 So starts another painting season with my long time painting friends of Newburyport Ten.  We are off to a warm April day start at Milestone Farm in Newbury.  Acres of hay fields are beginning to green along the edges of water-logged swathes. I particularly liked the zig-zag pattern cutting through this scene as well as the reflective patterns of distant trees. 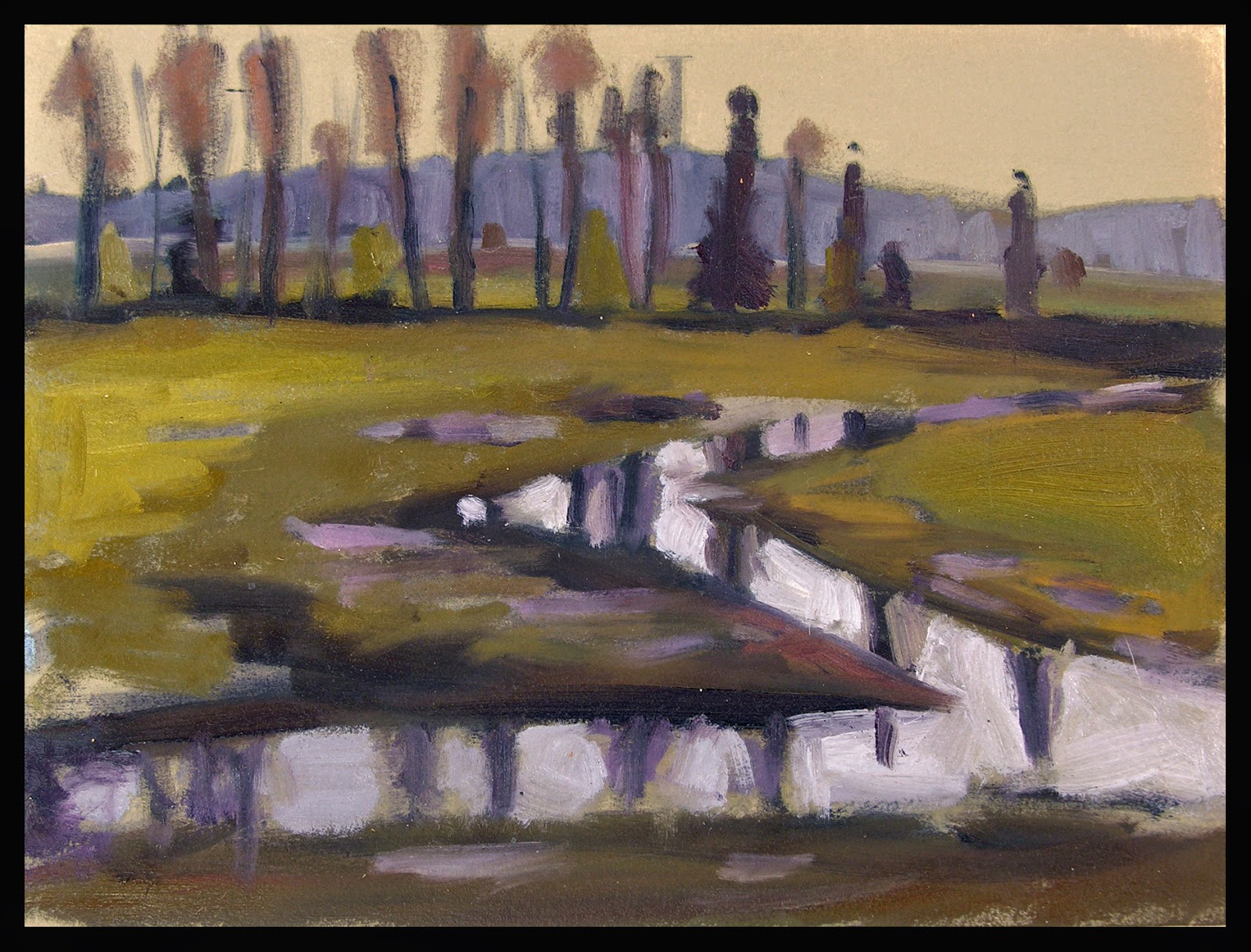 Another day we painted at the end of Plum Island. There are hills of grassy sand dunes, an old coast guard station and lighthouse, and the Merrimack River emptying into the Atlantic Ocean.  There are plenty of goofy, friendly dogs running about kicking up sand for everyone's enjoyment too. Their care free romps will end soon due to summer beach regulations. 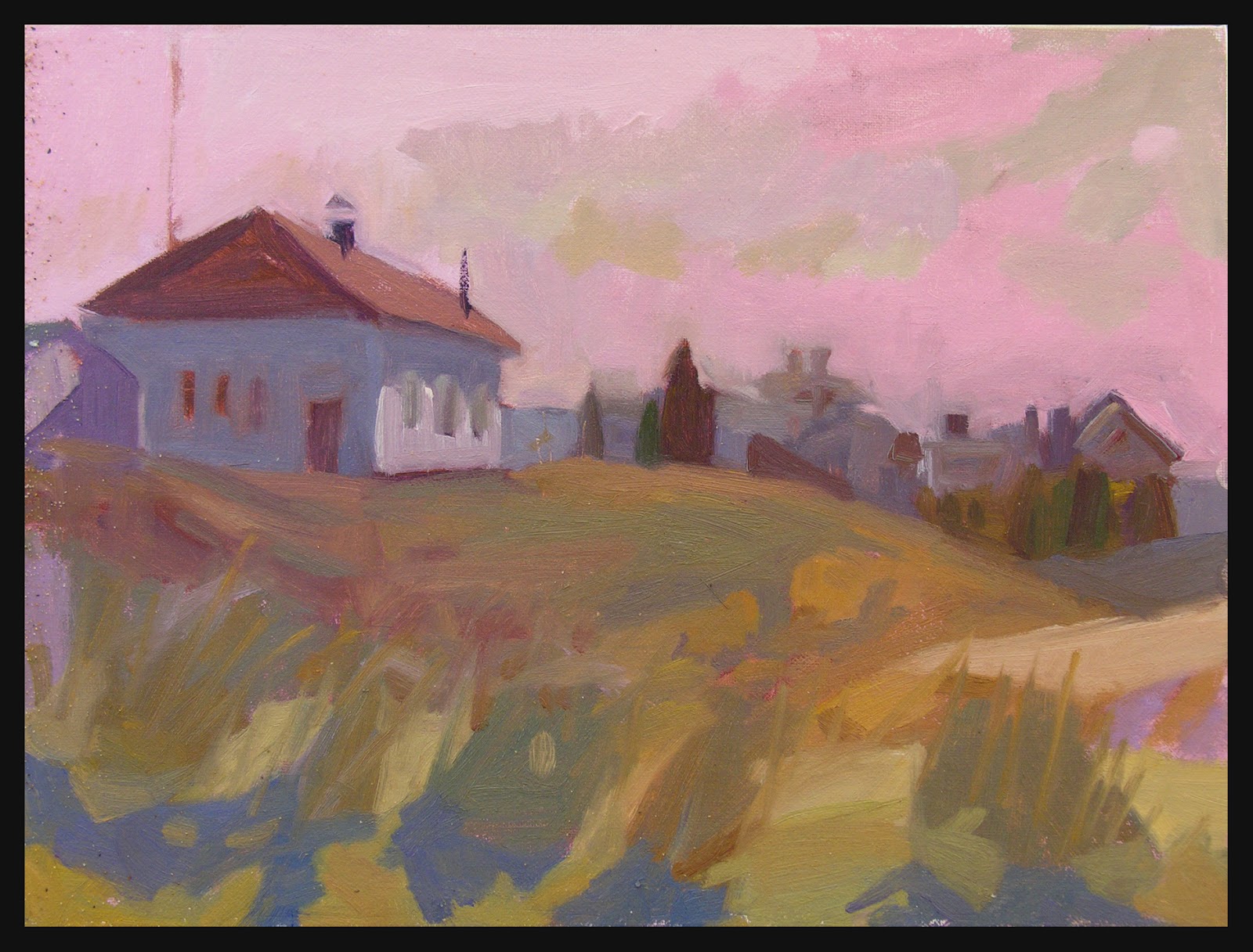 And then the following week, three of us painted Rowley's Jewel Mill complete with a dammed spillway and pond, rushing streams and the antique mill. 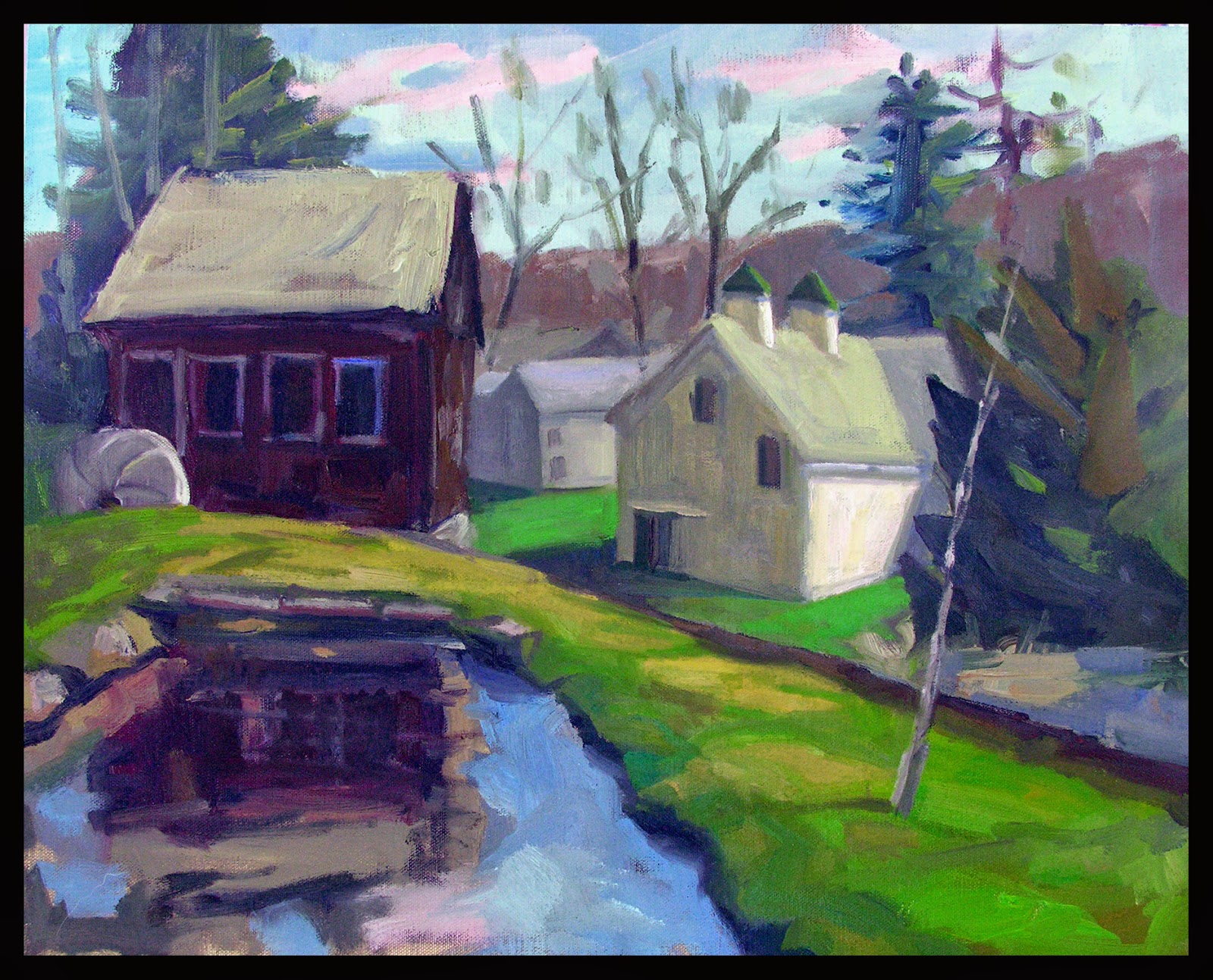 Posted by Susan Jaworski-Stranc at 11:40 AM No comments:

...so says my friend of 35 years, Terry.
After a few days of painting in 40 degree weather which included an uncomfortable day of gusty, cold winds, and a few sprinkles, my friend flew back to Maryland with a few paintings to jump start another season in the fields. While trees refuse to unfurl their tender green leaves and chipmunks were still slumbering underground, two faithful friends shared the love of outdoors by painting side by side. 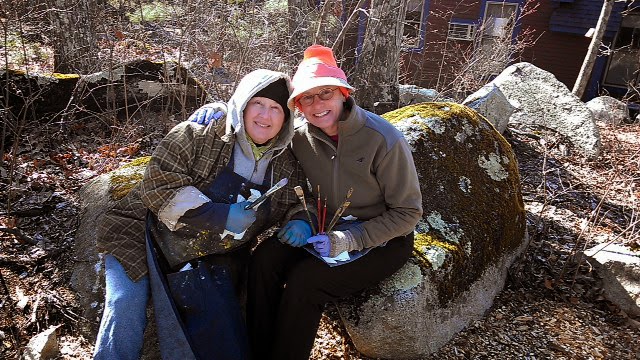 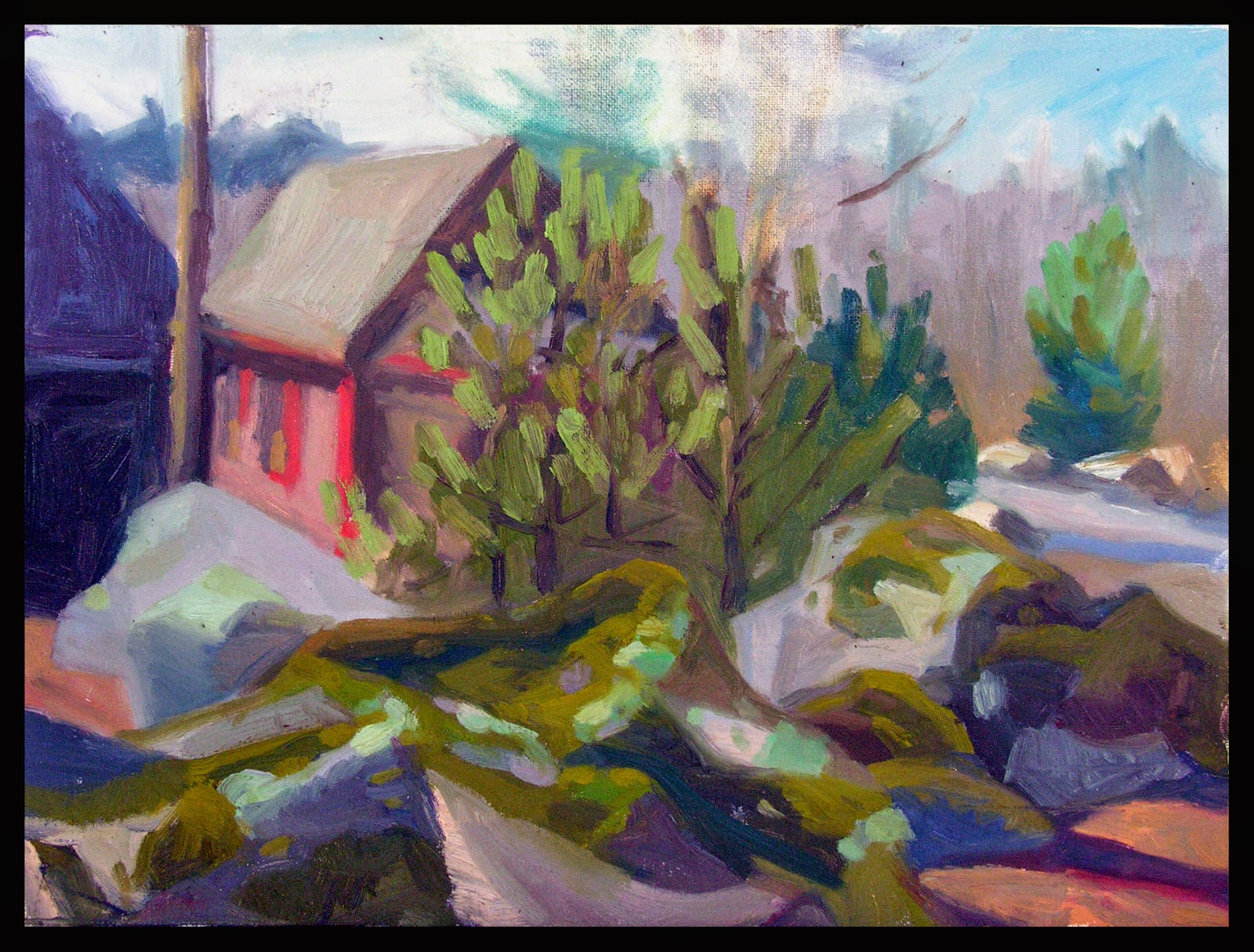 and an unfinished painting of moss and lichen covered granite boulders located behind my Westford cottage.
Posted by Susan Jaworski-Stranc at 10:46 AM No comments:

I painted for a few hours at the John Greenleaf Whittier Homestead in Haverhill.

Although area temperatures were warming and the greening has commenced, my shod feet felt like 2 laid out 'catch of the day' in a bucket of ice after a few hours of standing in snow drifts along a hedge row. 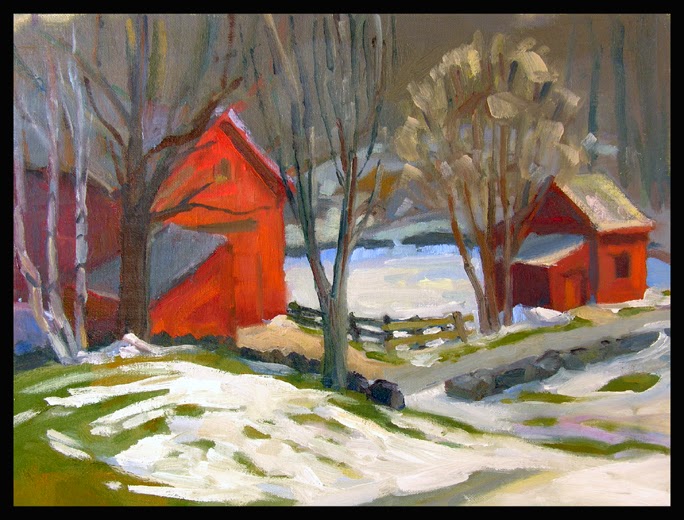 This well cared for rural New England farm of 69 acres with trails, farm buildings and farmhouse.  The site is a wonderful museum established in 1892 after Whittier's , Snow-Bound, a lengthy poem became very popular and well liked during Victorian times. The poem narrates stories told by a family sitting around the fireplace, buttoned up in the farm house during a three day raging New England blizzard.

So I spent some time painting the brightly colored and well preserved barns surrounded by thick grey woods and melting snows.  When I returned home, I couldn't help but reference my very own canned peaches and tomatoes hidden away in my dark pantry to those two buildings.  Taking two jars out of storage and placing them on the table, who wouldn't enjoy their well preserved color and freshness after a good day of painting in late winter. 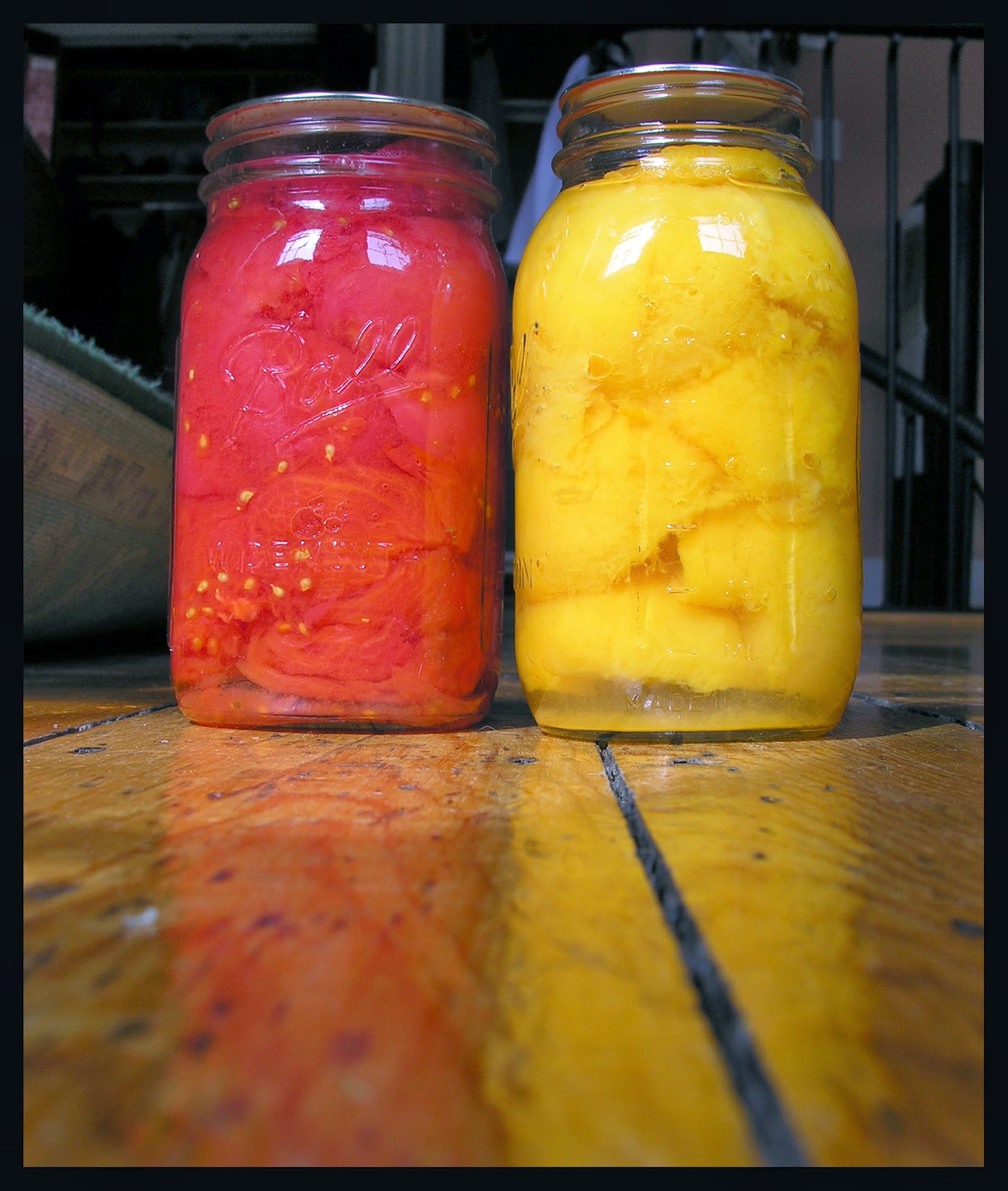 Posted by Susan Jaworski-Stranc at 7:43 AM No comments: